In December of last year, we revealed the winners of Festicket's inaugural Festival Of The Future Awards, launched to celebrate the festivals, projects, and initiatives that are leading the way in innovation and helping to shape what's to come.

Our guest panel of industry experts selected a winner from each of the seven categories from those nominated (and you can see all of the winners here), but now it's time to delve a little deeper into those that came out on top, and explore why they stood out.

First up we have Basoa, winner of the 'Innovation in Staging' prize. We asked Marc Ventosa, head of booking at Bilbao BBK Live, all about the electronic music focused stage that has become a favourite fixture of the festival site over the last few years. Here's what he had to say.

When was the idea of Basoa born?

Basoa started to take shape in 2015 when we were organising the 2016 edition (a year of changes for Bilbao BBK Live's style). We wanted to make some changes to the festival, make it more special and unique, look into every little detail from the lineup to the artwork, and the whole festival experience. And it was very clear that electronic music and club culture had to play a key role in it.

What was the initial aim?

Most of the festivals – and not only the electronic music ones – have DJs to close the stages, usually very late and in venues that are not conceived as a club. Big stages with visuals on the LED screen (often of questionable taste), with a thousand lights moving and confetti thrown over a public that is looking at the stage as if it was a concert.

We wanted exactly the opposite of all that: Less is More. We wanted people to enjoy the music in a space designed for it, with the appropriate sound system, almost without lights, no LED screen, no confetti; where people can barely see the DJ.

A place for them to just dance and not spend the whole time looking at a person playing records. We also wanted this not to be only in the last hours of the festival, but more like something that can work anytime: it’s the only stage in Bilbao BBK Live with shows non-stop from when the festival doors open until they close.

How did it take on its current form?

There are three main elements that we kept in mind:

THE FOREST: Basoa means forest in Euskera. The festival takes place in Kobetamendi, a mountain on the outskirts of Bilbao with incredible views of the city, all surrounded by trees. We have this little forest inside the festival site and when you enter there you can feel something special, you are entering Basoa.

SOUND: the sound is key in Basoa, we wanted it to be a full experience in itself. For many years, the sound would always come from the front, from a stage, in festivals, clubs and music venues. What we wanted for Basoa was a surround sound coming from eight sound towers and 32 PAs forming a circle. If you are inside the circle the sound is amazing, you can feel it everywhere, and it makes listening to the music and dancing a completely new experience. The last three years we’ve used a state-of-the-art D&B PA.

LINEUP: this is one of the things we put more effort into, both for the festival and for Basoa. We always look for artists that we really like and that we think can fit into something as special as this forest. After all, they are the ones creating this unique atmosphere. One of the rules we have is that they have to do long sets, usually three hours. This allows them to create something very special taking people on a journey without moving from this magical forest. Some of our favourite DJs have already been to Basoa: Four Tet, Daphni, Floating Points, John Talabot, Dixon, Horse Meat Disco, Andrew Weatherall, Tim Sweeney, Pional, Hunee, Prosumer… 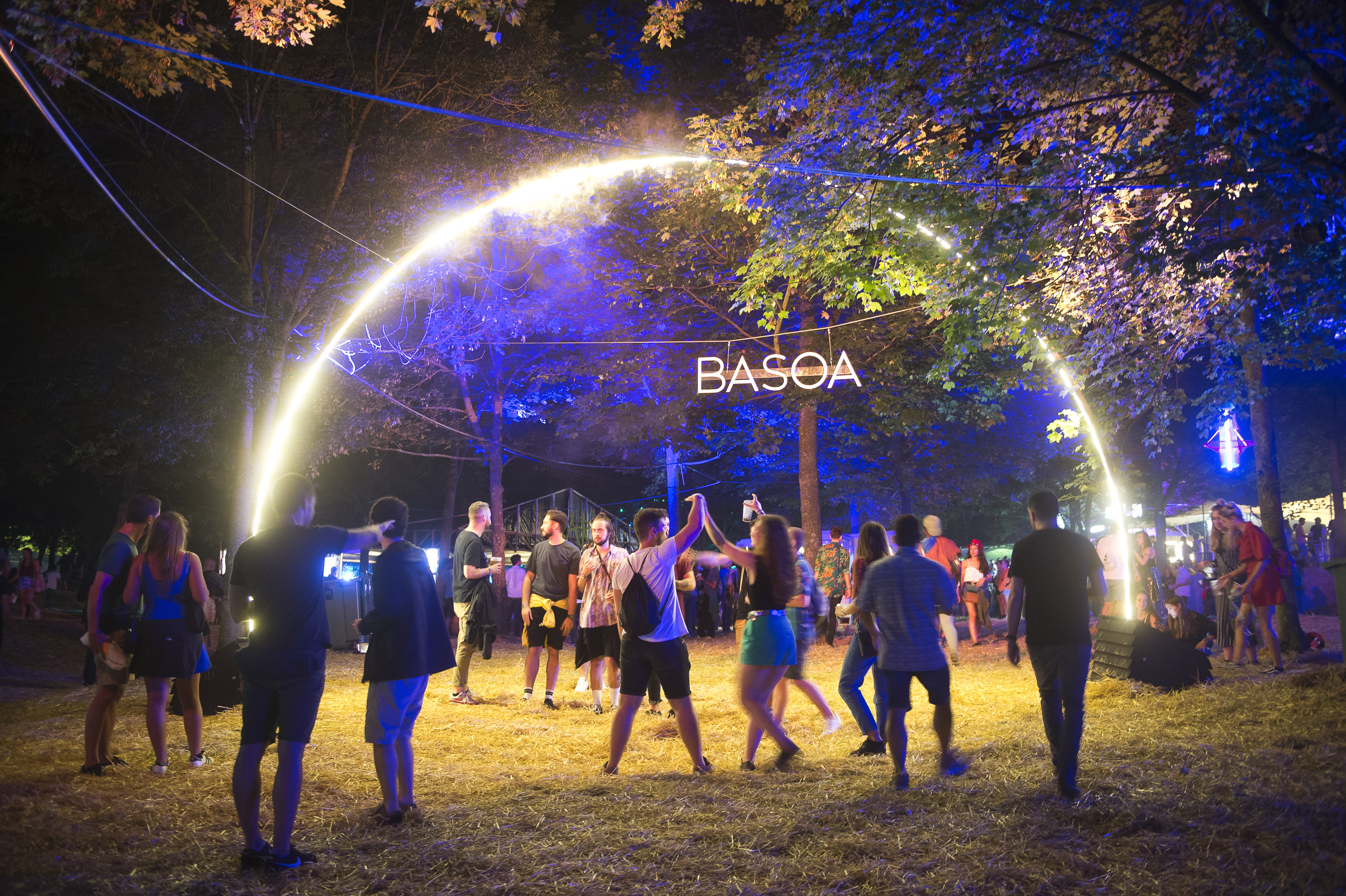 I feel there are a few things which make Basoa unique, first of all, is the location. The stage situated in the middle of the forest and with the lights and lasers creates something really special. The texture the lights and lasers have on the stage are amazing and the feedback is always fantastic.

Another thing is the sound; if you’re within those eight sound towers, the music is really bouncing off your body and there are not many festivals you can go and have this feeling of sound, which for us was fundamental when deciding to do this stage.

What environment do you try to create?

What we try to work on is the experience of going deep into a new enigmatic place where the forest is the focus, and without interfering with the space. For the last three years, the design has always included natural elements like wood or plants in order to create an infrastructure that blends with the environment. This last year we have worked with mirrors, both in the sound towers and the stage, pursuing a concept that reflects the environment without any obstacles, integrating Basoa into the forest.

Who is responsible for the lighting and the visual elements?

The Last Tour design team works together with the technicians to define the light, locations and visual effects teams. It is a process where we talk about different options and somehow we always get to the same conclusion: Less is More. We try to stay away from huge effects because, as said before, the focus has to be the forest. We think this is the way to go and we will keep working under these guidelines. 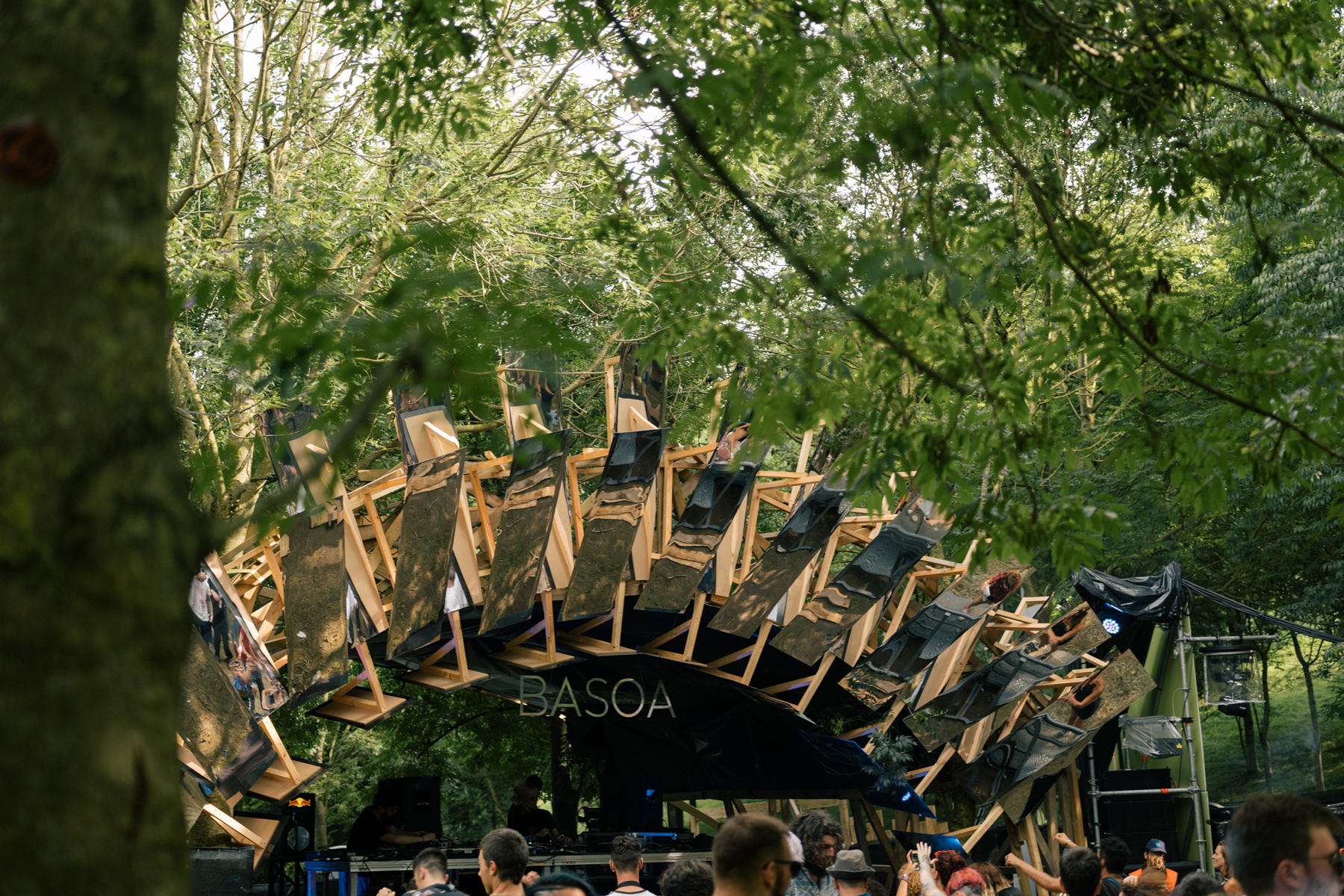 Can you tell us about the strong branding and visual identity – the posters, artwork etc.?

From the start we wanted Basoa to have its own identity, so we decided that it was important that it had its own poster announcing the acts, separate from those acts appearing on the full festival poster. We felt this gave the stage the importance it deserves and an identity from the start. In the first year, we had Alex Trouchut, who’s a renowned graphic designer (and music lover) from Barcelona but based in NYC. In the second year, it was Lóbulo, and last year was Binalogue (below). 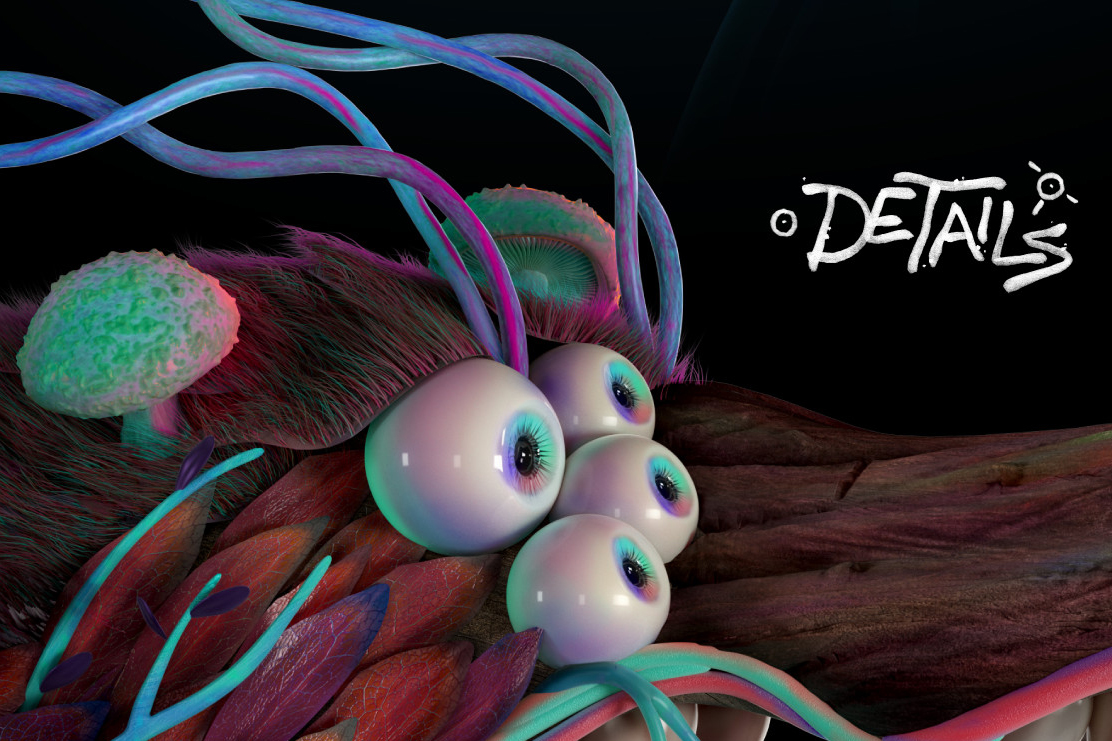 Who curates the musical programming each year? Are there rules about the kind of people who are booked to perform, in keeping with the Basoa identity?

The curation and booking is done by our Booking team, they have a clear idea of the artists they would like and feel that reflect what Basoa is. There are no rules on who we book, only the 2-3 hour minimum set, but there’s a certain style we do look for and I think that’s seen on the lineups we’ve had up to now. The idea is to continue to find a good mix of up and coming DJs and more established ones to create a special vibe at the stage.

What plans are there for future developments of the Basoa concept?

Last year a little brother from Basoa was born, LASAI, which means “quiet, slowly, easy...” in Euskera. It’s a small DJ booth, no stage, with amazing views from the city, just up the hill next to Basoa, and there’s only one rule: you have to play under 100BPM. Any style, anything you want, but below 100BPM.

We started this as we realised at all festivals everything happens fast, loud, hard, and we wanted to create a space at the festival where it was the other way around. People still dance a lot, that’s the idea basically as well, but dance in slow motion which is more fun and interesting sometimes. On the first year, we had people like SOPHIE, Joe Goddard, Slow Porn, Discodromo and Toulouse Low Trax playing. Also, the first night was curated by The xx and Young Turks and had sets from Romy, Young Turks DJs and DJ Lilocox, among others. In 2019 it will come back with a very special lineup.

This year there will be a new stage design at Basoa as well, and we’re working on more changes to improve it and make it even more special.

Tickets, packages, and extras for Bilbao BBK Live 2019 are on sale here.