Until the turn of the year, you'd be forgiven for thinking that Tame Impala have been on an indefinite hiatus, considering that the main-man Kevin Parker seemingly spent more time brushing shoulders with the likes of pop-titans Lady Gaga, Travis Scott, and Mark Ronson in recent years.

That was until Tame Impala were (somewhat out of the blue it can be fairly stated..) revealed as one of Coachella's three headliners on the cusp of 2019. For an artist that hadn't released any new material since lauded psychedelic rock/alternative R&B masterpiece Currents made the innovative Parker a bonafide phenomenon back in 2015, securing the headliner spot at the zeitgeist-formulating festival was testament to his enduring popularity, whilst cementing Kevin Parker and his Tame Impala outfit as one of the decade's most influential musical projects. 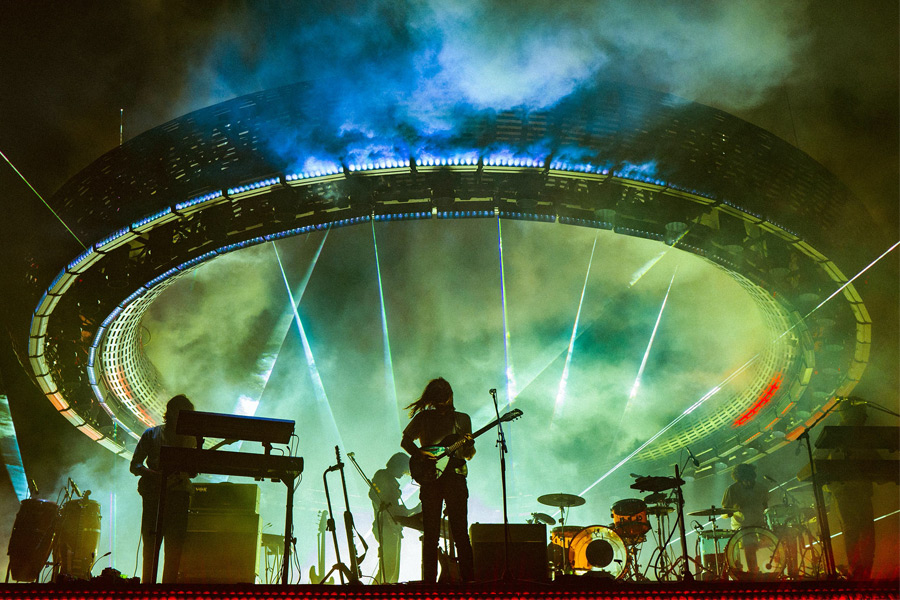 In the Coachella announcement, Parker teased that new music was in the works; it's now come to light that highly-anticipated The Slow Rush is slated for release in February 2020, with a UK exclusive performance at London's All Points East also confirmed in the following May. Having almost single-handedly brought psychedelia back from the doldrums of pastiche rock music, lead singles 'Borderline' and 'It Might Be Time' promise progressively cosmic arrangements and the intricate melodies that we've grown accustomed to from Parker's mind-bending oeuvre.

As I'm sure you're aware, rising to headliner status doesn't happen overnight, and Kevin Parker along with his band of psyched-out hometown pals have been playing together as early as 2007, releasing some of the most fluorescent psychedelia this side of 1970.

Before Tame Impala had even released their debut album they'd already developed an international fan base, and their debut overseas festival appearance at Summer Sonic in Japan gave them a taste of what was to come.

After uploading several tracks to Myspace in 2007, several record labels scrambled for Kevin Parker's signature. Two EP releases later, as well as support slots for MGMT, Yeasayer, and The Black Keys and the band were well on their way.

Note the early performance of 'Half Full Glass of Wine' which has become a setlist staple and fan-favourite to this day, as the band continue to jam this out and create an even more mind-bending version than that of the original when they perform live.

This blissed-out rendition of 'Why Won't You Make Up Your Mind?' against the backdrop of the Californian forest highlights the ideal environment to listen to their critically-acclaimed 2010 debut album Innerspeaker as you can virtually feel the vibrating guitar lines echoing through the trees.

The sun-faded, washed-out vocals became a trademark of Kevin Parker's production, giving the band a hybrid sound between the latter-year Beatles and psychedelic elder statesmen The Flaming Lips, much to the delight of both publications and fans in the UK and US.

Glastonbury, oh Glastonbury. The sheer exposure it gives artists can change a career on the spot and with the addition of French hip-hop drummer Julien Barbagallo, this was the point where Tame Impala proved to be a real force as live performers.

The release of 2012 sophomore album Lonerism saw Kevin Parker develop the band's sonic palette, and the album received widespread acclaim for its mixture of introspective lyrics, intricate sound production, and strong sense of melody, ending up with a Grammy Nomination for Best Alternative Music Album.

Just look at the Glastonbury faithful respond to lead single 'Elephant' at the 18:00-minute point. Well, and truly, kicks off.

Covering Outkast's 'Prototype' may've appeared an odd choice of cover for a band that previously drew comparisons with The Beatles, but it exemplified Kevin Parker's musical diversity and suggested the trajectory on the next album.

This scaled-down performance highlights Kevin Parker's inspiration for melody, the versatility of the band, and brings his crystalline vocals to the fore.

2015's Currents was released to both critical and commercial acclaim, pushing Tame Impala into the mainstream consciousness due to its expansive synthy-psychedelic and R'n'B-tinged aesthetic.

Lead single 'Let It Happen' is both a trippy and rapturous seven-minute long wig-out, perfect to get you off your feet and into a hallucinatory state of mind, which acts as the supreme set opener.

Currents was admired so much, in fact, that Rihanna covered the final track on the album 'New Person, Same Old Mistakes', opening up Tame Impala's unique blend of organic and electronic psychedelia to an entirely new demographic.

Having toured the album extensively for the best part of two years, the final stop was a headline performance at Panorama Music Festival. A cosmic end to that chapter which culminated with both mind-altering visual production and a band at the peak of their powers. On to the next chapter, then.

To see which festivals Tame Impala will play in the near future, take a look here.