Understanding the Mythology of Woodstock

Update: This article was originally posted in March 2019 after news of Woodstock's 50th anniversary event arose. However at the end of April the festival's key investor Dentsu Aegis Network decided to pull their funding due to a lack of faith in its production and health & safety standards. Despite several desperate consequent attempts by organiser Michael Lang for the festival to go ahead Woodstock 50 was unfortunately forced to cancel.

Last week Woodstock Music and Arts Fair revealed the lineup for their special 50th anniversary festival Woodstock 50, which had been much-anticipated since news of the event arose back in early January. Among the names announced were Jay-Z, The Killers, Chance The Rapper, The Black Keys and Miley Cyrus, as well as a notable handful of artists who performed at the legendary weekend in 1969, such as Santana, Canned Heat, David Crosby, Country Joe McDonald, plus former Grateful Dead members performing as Dead & Company.

The reaction to news of both the anniversary celebration to be held from 16-18 August in Watkins Glen, New York, and its lineup poster was markedly divisive. Though its organiser and original Woodstock co-founder Michael Lang was keen to emphasise the festival’s cultural significance – linking the grassroots and youth movements of today, and socio-political context out of which they have grown, with those of the late sixties – cynics were quick to call the event a cash grab, squeezing any last drops of cultural kudos that hadn’t already been wrung dry by the notorious Woodstock ‘99.

Wittily named ‘the day the Nineties died’, the thirtieth anniversary festival was wrought with instances of sexual assault, drug overdoses, overcrowding and extortionately priced water in the midst of a July heatwave. In the context of 2017’s disastrous Fyre festival and its much-discussed documentary released just a week after news of Woodstock 50 came to light, perhaps people were right to be sceptical.

Further debate ensued when Woodstock finally revealed their lineup poster last Tuesday (19 March), with some purists criticising its inclusion of rap, R&B and pop artists, and others deeming it too narrow minded; one Twitter user claimed the festival looked like it had been booked by someone whose “only exposure to music has been through the Grammy's "Best Rock Performance" category between 2010-2013”.

But given the cultural weight of Woodstock ‘69 and the mythology with which it is densely shrouded, impassioned response to any murmur of its revival is inevitable. It has been the subject of poetry, painting, music and film, many of it performances are accepted among the best of all time, and simply its name is used to signify a whole generation. To try and grasp its unique place in cultural history we look back at that original weekend on the Catskills dairy farm in August of 1969, and in adding colour and context attempt to cultivate a better understanding of the weight that its future holds.

On the morning of August 13 1969, dreadfully underprepared but filled with characteristic optimism, entrepreneurial hippies Michael Lang and Artie Kornfeld opened the gates of their first festival, letting the amassing droves of young crowds in to what they had promised would be ‘Three days of peace, love and music’.

Not that the gates mattered, though. Those that had been erected in time soon proved useless as the festival goers came in their tens, and then hundreds-of-thousands, blocking the roads until it made more sense to get out and walk. 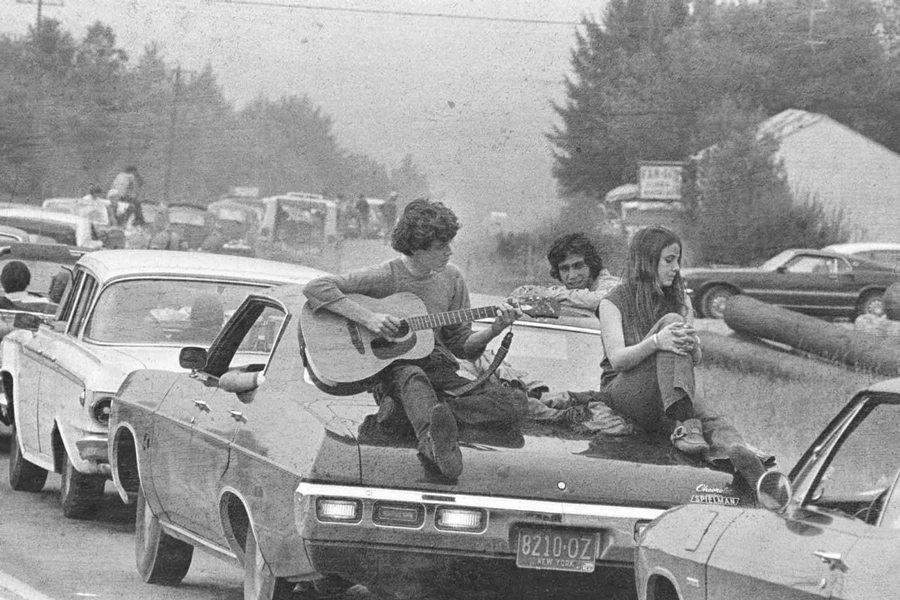 Woodstock Ventures had formed only months before, after receiving investment from two New York financiers looking for “interesting, legitimate investment opportunities and business propositions”, and 186,000 tickets were reported to have been sold, despite assuring the community of Bethel in upstate that the event would near about half of that. Woodstock was, then, very much originally intended as a business venture aiming to capitalise on the middle class countercultural youth, much like how Monterey and Miami Pop festivals had done the two years previous, albeit on a smaller scale.

After several failed attempts at securing a venue, the venture finally secured a permit by the town of Bethel after a dairy farmer Max Yasgur agreed to lease his 600-acre grounds to them. Prioritising construction of the stage on Yasgur’s farm (and by extension, the music) over well-built gates and fencing (accordingly, a guaranteed profit), would prove instrumental in crystalising the image of the hedonistic and free-for-all utopia Woodstock would soon be known for.

The event was billed as ‘An Aquarian Exposition’, which alluded to the fashionable though somewhat hazy idea among the counterculture of the dawning of the astrological Age of Aquarius, popularised by the 1967 rock musical Hair. Given that the zodiac sign Aquarius had come to be associated with re-birth, humanity and, as the Hair song goes, “harmony and understanding, sympathy and trust abounding”, it’s evident that Lang and Kornfeld had a clear understanding of the web of ideals they wanted Woodstock to be at the centre of.

With the rose-tinted nature of time however, it’s difficult to establish the extent to which they or anyone there knew how monumental the festival would become as it was playing out in front of them; though they had the bias of ‘straight’ society behind them, the few newspapers who covered the event focused tediously on drug use, logistical problems and, as if in surprise, how generally well-behaved everyone was.

It would not take long however for the mythology of Woodstock to accrue. Less than a year later, Joni Mitchell – who, perhaps significantly in this case did not attend the festival – would write Woodstock’s eponymous ode, which imagined attending the festival as a cosmic or religious experience, a return to the Garden of Eden, to innocence and purity.

“I dreamed I saw the bomber death planes”, she, and later Crosby, Stills, Nash and Young would sing, “Riding shotgun in the sky / Turn into butterflies”. These three lines go further than pretty imagery to explain Woodstock’s significance.

In the late sixties the Vietnam War was at its apex, and the US policy of escalation meant a vastly increasing number of Americans being sent to war, as well as wreaking havoc across North Vietnam with sustained bombing operations such as Rolling Thunder. Anti-war protests spread throughout the States across many social groups, but its sentiment was perhaps most embodied by the countercultural youth. As such, Woodstock became it’s defacto Mecca.

More than just a gathering of like minded hippies handing out literature, Woodstock became an alternative vision and counterpart to the war. With the severe roadblocks and the organisational disarray, artists such as Richie Havens, who was persuaded to perform an overly extended opening performance due to the delayed start and frustrated crowds, had to be flown in to Woodstock in military helicopters.

Egged on by the promoters to continue playing, Havens, perhaps inspired by the irony of being dropped not into a war zone but a place of peace and sanctuary (however disorganised it may have been), ad libbed on the word 'Freedom', an improvisation that would become one of his most iconic songs.

Imagery and reminders of war were turned on their heads everywhere, from communal tents to military jackets to the rifle-like distortion of electric guitars. Country Joe McDonald’s Saturday solo performance was impromptu and yet, just like Havens’ ‘Freedom’, it resonated powerfully.

Closing on his band’s 1967 hit ‘I-Feel-Like-I’m-Fixin’-To-Die Rag’, McDonald riled up his audience to sing along with him: “And it's one, two, three, what are we fighting for / Don't ask me I don't give a damn, next stop is Vietnam / And it's five, six, seven, open up the pearly gates / Ain't no time to wonder why, whoopee we're all gonna die”. Though sombre, McDonald’s words were doused in irony to highlight the bleak reality of the draft and hellish nature of war.

As the enthusiasm spread across the crowd and people began cheering and smiling along to these lyrics, there must have been a strong sense of empowerment, as if owning and laughing away the looming prospect of chaos and terror. In Michael Wadleigh's mammoth 1970 documentary Woodstock, karaoke-style lyrics are added to the footage, understanding the communal power of the moment.

The influence of Wadleigh’s film in mythologising Woodstock cannot be understated. Released less than a year after the festival, Wadleigh and his crew (including a young Martin Scorsese) shot and edited footage of the weekend into a three-hour, Academy Award-winning documentary. Rather than following the festival completely linearly, the film drifted in and out of themes and vignetted performances, camp conditions, social groups, couples, locals, children and little moments that may have otherwise been missed, often at the same time through the use of split screens.

This multi-layering, patchwork of perspectives reflected a more genuine sense of feeling and being at Woodstock, but it also embellished and warped a highly poetical version of it. To those who had not attended Woodstock the film immersed them as if they had, and to those who had made it its artistic and candid style romantically filled in the inevitable gaps caused by time, not to mention the sleepless nights or the dodgy acid.

For instance: for many the mention of Woodstock conjures the image of Jimi Hendrix tearing down the national anthem in the early hours of the morning with his droning and mesmerising ‘Star Spangled Banner’.

Though the performance has since rightfully sparked intrigue about its message – a sonic reflection of America’s melting ideals as a war machine, or just Rock and Roll? – in reality most of Woodstock were not there to see it. By Sunday morning the festival was on the brink of intervention from the National Guard, and it is said that only 30,000 attendees were left to see what has since seemingly come to be accepted as the embodiment of Woodstock.

Though it was by no means on the face of it the first large-scale popular music event of its type, Woodstock became the archetype upon which legions of succeeding festivals based, and continue to base themselves on. Yes, there was mud, overcrowding, drug-related freak-outs, road pileups, power outages, rainstorms and all the chaos that festivals in today’s society need to avert to avoid failure, but more importantly there was the myth.

An inimitable mix of serendipitous decisions and happenings, colossal performances, historical context, artistic, poetic and dramatic license culminated in Woodstock’s unique mythology. What respectable entrepreneur or artist doesn’t want their product or their art or their festival to be so much more than just that?

When that entrepreneur and that festival is once again Woodstock, perhaps it’s fair to sigh in dismay, particularly given the failings of its revivals in the 90s. In a recent interview with Rolling Stone, Lang claimed that this time “we’re going back to our roots and our original intent [...] Woodstock, in its original incarnation, was really about social change and activism [...] And that’s a model that we’re bringing back to this festival. It’s a gathering for fun and for excitement and for experiences and to create community, but it’s also about instilling kind of an energy back into young people to make their voices heard, make their votes heard”.

In the context of stark political polarisation and dissatisfaction, and movements such as Black Lives Matter and #MeToo, there is certainly scope for Lang’s hopes of education and activism to flourish, albeit with the modern day glean of glamping options on the side. But to look at the new Woodstock poster and compare it to the one posted half a century before in hopelessness is to underestimate the weight of the mythology that entombs it.

With Woodstock 50, Michael Lang intends to find a new dawn to the same myth he himself helped to create.