And there you have it: Eminem completes the headliners for this year's Reading and Leeds Festivals, joining Muse and Kasabian.

On this latest announcement, Melvin Benn said: “Eminem returning to Reading and Leeds is beyond exciting. His 2013 headline performance was incredible and I can’t want to have him back. In addition to our third and final headliner (joining Kasabian and Muse) we’ve announced over 70 additional acts to this year’s line up - it’s looking stronger than ever.”

And now we know our three headliners, here's a rundown of what we can expect from each. 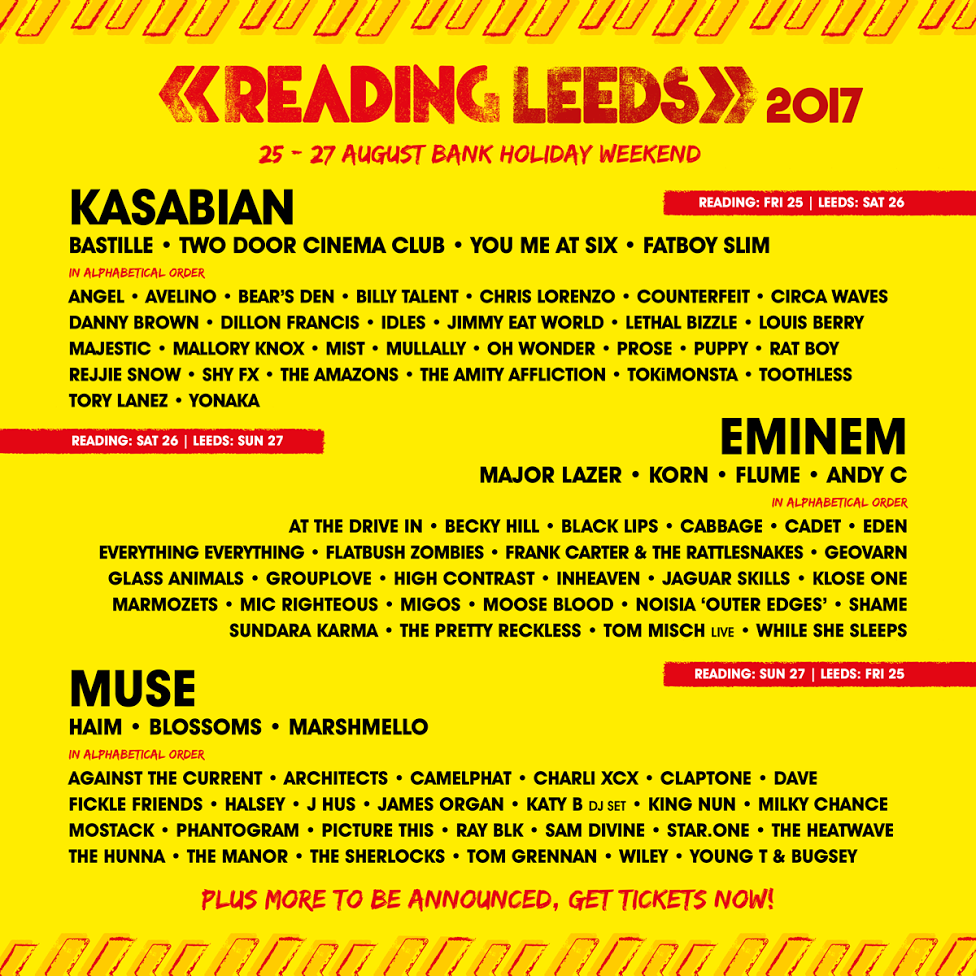 Having first played on the Carling Stage back in 1999, British rock band Muse have since become Reading and Leeds regulars, having played a respectable four times, including headline sets in 2006 and 2011.

Now one of the world's most influential bands and famed for their high-energy live shows, the band have sold out arenas and headlined festivals around the world.

Their latest album Drones won Best Rock Album at last year's Grammy Awards, which they followed up with a triumphant headline set at Glastonbury Festival. Eager to up their game for their Drones live shows, anticipation continues to build for what will surely be another landmark moment in their already illustrious career.

With their sixth studio album set for release this spring, Leicester based Kasabian have come a long way since they're first appearance at the festival in 2004.

From the indie-rock beginnings of their self-titled debut and Empire to the more electro-infused, rave inspired party starters of 48:13, the band have moulded into one of the UK's most hard-edged rock bands.

On their return, Serge Pizzorno said: “When we played in 2012 it was such a special honour because it was the first time we’d headlined a major festival. It was phenomenal. With these new tunes, it’s going to be fucking incredible.

“There’s always a twist in the tale. We grew up around the rave scene and that’s how we like to do things – to bring the carnival. You know, last day on Earth vibes.”

Consistently regarded as one of the greatest rappers of all time, Eminem has an enviable discography: the Dr. Dre inspired Slim Shady, the politically charged Eminem Show, and the wild and dangerous Marshall Mathers LP, the man has become not just an icon in hip-hop but in modern culture itself.

No stranger to controversy, his razor-sharp wit and ferocious delivery have made him one of the world's most unpredictable and infectious characters, while also making his albums a staple of every record collection.

Keen to show he's still at the top of his game, the American rapper's Reading and Leeds appearance will be a rare chance to see the man add another chapter to his already legendary story.

Reading and Leeds Festivals will take place on 25-27 August 2017. Find out more on our guides, and book your tickets and packages here: Reading Packages | Leeds Packages