The 10 Greatest Coachella Performances of All Time

Now twenty years on from its humble beginning in 1999, Coachella has become a two weekend spectacle played by the worlds biggest artists, along with exciting new comers. Constantly surprising festival goers with exclusive headliners and epic band reunions, Coachella is worthy of its title as 'America's greatest music festival'.

I'm sure that no one would turn down the chance to play at one of the biggest festivals in the world and luckily for us Coachella has produced some of the most iconic, surprising performances to date and created history on their main stage more than a few times.

Having reached their twentieth anniversary this year we've decided to pick out our Top Ten greatest Coachella performances of all time.

Nicknamed Beychella, Beyoncé's Coachella headline slot was perhaps one of the most highly anticipated performance for the festival as she had to cancel her scheduled 2017 performance. Not to mention she was the first black woman to headline the festival in its twenty year history and her two hour performance reminded us why she is in fact the Queen B.

Opening with the classic 00's tune 'Crazy In Love', when all was said and done her immaculate set featured some of the highest scale production and precision the festival has seen.

Showcasing black pride throughout, from singing 'Lift Every Voice and Sing' to quoting Malcolm X between songs, Beyoncé not only entertained the 100,000 strong audience, but also brought history into her iconic performance.

Naturally there were surprise appearances from Solange, Jay Z and more, as well as a Destiny's Child reunion to complete an already untouchable performance.

Giving a increasingly rare performance, it's safe to say Prince ruled Coachella with his 2008 headlining performance.

When the lineup was released, it immediately ascended into the conversation of best Coachella lineup ever. Including The Verve, Portishead, Raconteurs and Roger Walters to name few, fans were soon sent into a frenzy when weeks before it was confirmed that the priest of pop, Prince, would also be joining the lineup as well.

April 26th, Prince took to the stage ready to party. Having mesmerised the crowd with his catalogue of number ones, His Royal Highness treated fans by adding an exciting, electric range of covers to his set including Sheila E's 'The Glamorous Life', The Beatles' 'Come Together', The B-52's 'Rock Lobster' and even Radiohead's 'Creep', which later took over the internet.

Regarded as Coachella's best electronic set of all time, Daft Punk sparked a new era for dance music in 2006.

Over a decade ago Coachella's Sahara Tent nearly imploded on itself after forty thousand people tried to squeeze into a space designed for ten thousand, all to see the generation defining french duo perform their now legendary hour long set.

Catalysing electronic music into the mainstream in the late 00's, the band also introduced the immaculate production and innovative stage designs that have become synonymous with the EDM events we see today.

Dr Dre and Snoop Dogg's Coachella headlining slot could easily be the most unexpected and famous performance to have graced any stage.

The hip hop legends took their joint headlining set to a another level by resurrecting the legendary West Coast rapper Tupac Shakur, who was killed in 1996. Shocked fans watched as the holographic reincarnation strutted across the stage with Snoop and Dre during a rendition of '2 of Amerikaz Most Wanted' and 'Gangsta Party' for a truly astonishing, hair raising moment.

And as if bringing the much missed rapper back to life wasn't enough, the duo also brought on plenty of guest stars. Wiz Khalifa, Kendrick Lamar, 50 Cent, Tony Yayo and Eminem all turned up during the set.

Between all the high profile guests and the 2Pac hologram, Snoop Dogg and Dr Dre's iconic performance made history on the spot.

Once M.I.A. stepped onto the Gobi Stage in 2005 it was clear it was going to be a career-making moment for the singer. A newcomer, the rapper explained it was her first festival appearance before bursting into her kinetic performance.

After her overlapped fifty minute set came to an end, M.I.A. made history by being the first artists at Coachella to get an encore in a tent. With people dancing outside the tent and getting restless inside, Coachella had never seen such an enthusiastic crowd for such a young artist.

Three years later M.I.A returned (on a much bigger stage) as the most hotly anticipation performance that year. 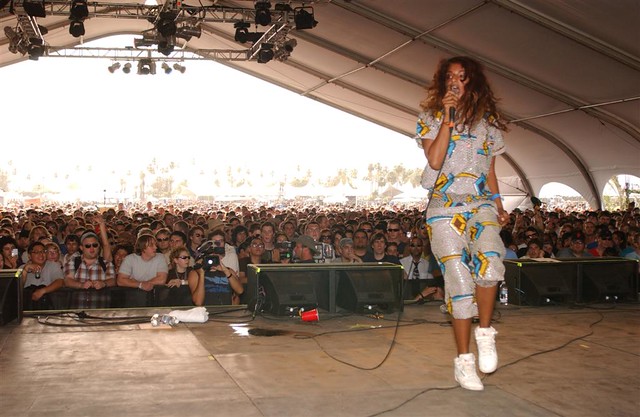 2011 saw Kaye West headline Coachella and boy did he bring the 'Power'. After flying over the audience on a crane and making his way through the crowd to a stage towered with ballet dancers, Kanye performed his theatrical set that was described as one of the best hip hop performances to date.

Before finishing his set West dedicated the show to his mother after her unexpected death and walked off having made Coachella history.

Rage Against The Machine, 2007

Nothing quite shook Coachella like the return of Rage Against The Machine and we mean literally shook. Having headlined the first edition in 1999, RATM soon after disappeared for seven years before walking back onto the main stage to an estimated 100,000 crowd, the largest in Coachella's history.

Opening with "Testify" and ripping through a well planned setlist, the band took over Sunday night for a show that ruptured the heavens.

Armed with politically charged songs and a crowd full of moshpits, the incredible response of what was meant to be a one off show prompted a full scale band reunion. 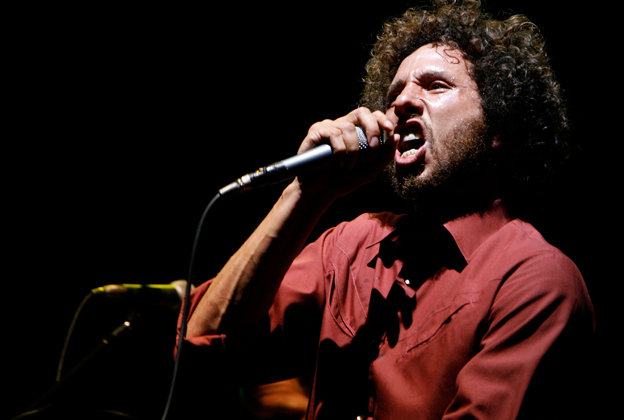 Although the most memorable thing about Waters' set wasn't in fact the music and that of a giant inflatable pig, it's safe to say that the Pink Floyd frontman gets it right every time and Coachella was another huge success for him.

By playing the classics like 'Wish You Were Here' and 'Shine On You Crazy Dimond', Waters cemented his name on this list. However some credit must go to the pig that was set loose over the crowd, ironically during the track 'Sheep', making it one of the most memorable and talked about performances.

The loose swine, adorned with political messages and reading "Obama" on the bottom was an ode to Pink Floyd's iconic Animals cover and although the crowd thought the pig breaking free was planed, it wasn't.

Coachella organisers offered a prize of $10,000 and four free lifetime festival tickets for whoever retrieved the pig and its carcass was found in Palm Springs.

Known for their passion on stage and extremely long sets, The Cure's headline show was literally cut off by Coachella's crew, but even this couldn't even stop the gothic kings.

Already a good way into the encore, Robert Smith shouted from under his signature nest of hair "they say we can only play one more song- are we f**k". During the 80s classic 'Boys Don't Cry' already half an hour over curfew, organisers cut the main stage speakers. Not disheartened the band carried on through the stage monitors fans rushed the stage to join in with an unprompted sing-a-long.

The Cure retired after what ended up a three hour set, proving they can not be stopped.

After an eleven year break, the alt-rockers reunited for a special 16 date tour including a last minute headline spot at Coachella 2004.

The combination of the band's much hyped reunion and their late addition to the festival lineup saw record numbers at the festival and quickly made it the first sold out Coachella since in inaugural edition.

In addition to the sell out desert experience, Pixies also joined up ten years later to headline Coachella again, showcasing another effortlessly immaculate performance. Lets hope they come back in 2024 too.