Black Deer Festival: "We felt the time was right to launch an Americana and country festival in a beautiful setting"

The award-winning Black Deer Festival can lay claim to being one of the UK's most unique festivals, bringing a flavour of the famed Americana culture across the Atlantic to British shores for a weekend inside one of the country's oldest deer parks.

We caught up with festival co-founder Deb Shilling as she gears up for the festival's second edition, taking place this June.

For those of us who aren’t familiar, could you explain what Americana is? And what is it about it that inspired you to create Black Deer Festival?

It’s what the industry calls roots-based music these days. It’s country, folk, blues, gospel, bluegrass… and a whole lot more besides. Artists who make Americana music promise to whisper their secrets into the ear of the listener and sing the truth about themselves, their lives and their experiences.

There’s very little vanity with Americana, it speaks of a time when things were simple. The genre is dominated by amazing singer-songwriters and bands who want to create something tangible that will stand apart from a disposable world, and live forever. As the founders, we are incredibly passionate about this genre – there’s just something very real about it.

We have a lifelong love of great country, blues and folk growing up to the sounds of Kris Kristofferson, Johnny Cash, Hank Williams, Cat Stevens and Glen Campbell – it’s just great music that speaks from the heart, whether it's foot stompin' bluegrass, rockabilly, heavy blues, gospel, folk rock, slide guitar or heart breaking country – we just love it.

Myself and co-founder Gill, who has produced festivals featuring Bob Dylan, Neil Young and many great Americana artists, felt the time was right to launch an Americana and country festival in a beautiful setting.

How has the UK taken to Americana? Last year was your debut right – how'd that go?

Pretty well, the Association of Independent Festivals voted Black Deer the best new UK festival, so I think we got something right. We bagged another three awards too but that’s just showing off! The true testament was the incredible number of tickets we sold for Black Deer 2019 off the back of the festival. As one person said: "Finally, I’ve found my people!" They were genuinely blown away by the incredible artists, the tastiest food, great young folk area and the laid-back community feel we worked so hard to create.


One of the most striking things is that your music lineup is really just a fraction of the festival, with a lot of emphasis on other activities. Was creating a festival that went way beyond the music an important thing for you?

Yeah, absolutely. Aside from the music, we want to bring the way of life to Eridge Park. Black Deer offers Americana culture at its most visceral and stays true to the communities and cultures that inhabit this indefinable world. It’s about authenticity, real life, craft, makers, storytellers and kindness. 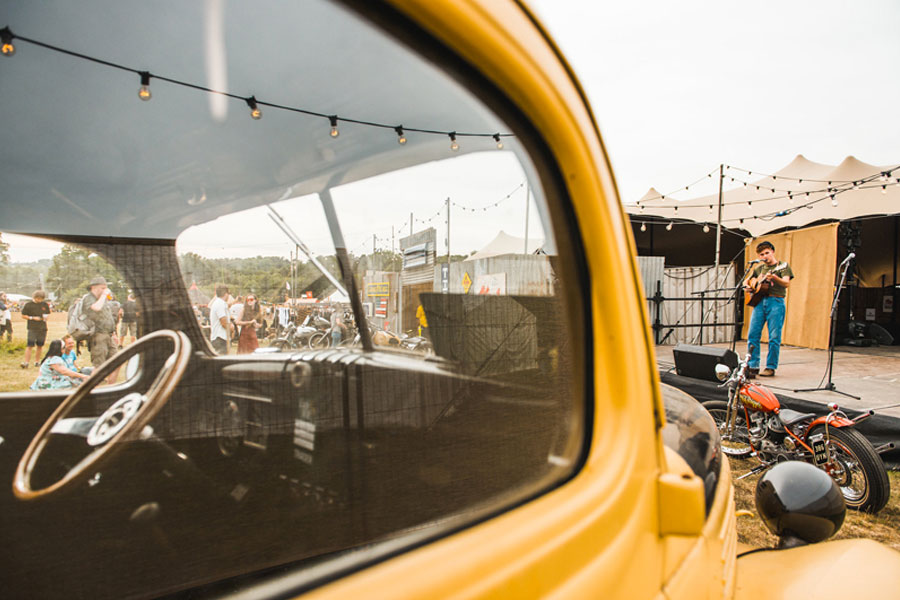 Let’s chat more about those extra activities. We’re hearing there’s everything from a vintage bike exhibition to woodcraft workshops?

The music takes centre stage but there's also a massive emphasis on all kinds of other stuff. The Roadhouse is where you’ll find our curators and partners Desertscene, who will be dishing up a double dose of heavy blues and the counterculture that surrounds it – custom bikes and American pick-ups, great apparel, and a lively bar to hang out in.

We also have a world first this year with a showcase of films remastered by cult film director of Drive fame, Nicolas Winding Refn. [His project] byNWR Expressway have specially curated a trilogy of hidden gems to be shown for the first time in a new form; Forty Acre Feud, Wild Guitar and Cottonpickin’ Chickenpickers all hark back to a time of the American drive-in cinema at its peak, and have been beautifully and meticulously restored to serve as a visual reimagining of early Americana alongside the rest of our Americana world.

Food is another huge part of Americana. What can we expect to be cooking up this year?

The festival will bring the very best in outdoor and smokehouse cooking to Kent – we have expert demonstrations and competitive BBQ competitions taking place across the three days with fabulous food, drink and hospitality on offer all over Eridge.

If you like BBQ, the Live Fire area is a must. The food at Black Deer will transport you to the smokehouses of America’s deep south with ribs, pulled meats, brisket, rotisserie chicken, smoky scents and sweet sauces, all washed down with the finest Bourbon and craft beers.

If you’re a fan of great chefs, we have skilled masterclasses from celebrated chefs and renowned characters in the artisan worlds of foraging and butchery. Vegan and vegetarian BBQ experts will be demonstrating the huge array of low ‘n’ slow food also on offer in modern-day BBQ. Big names and personalities for 2019 include industry-leading chefs and authors such as BBQ Hall of Famer and legendary US pit master, Ray ‘Dr BBQ’ Lampe, BBC regular and ‘Guild of Food Writers’ Chair, Genevieve Taylor, and ‘Caravan Restaurants’ Executive Chef, Matt Burgess. 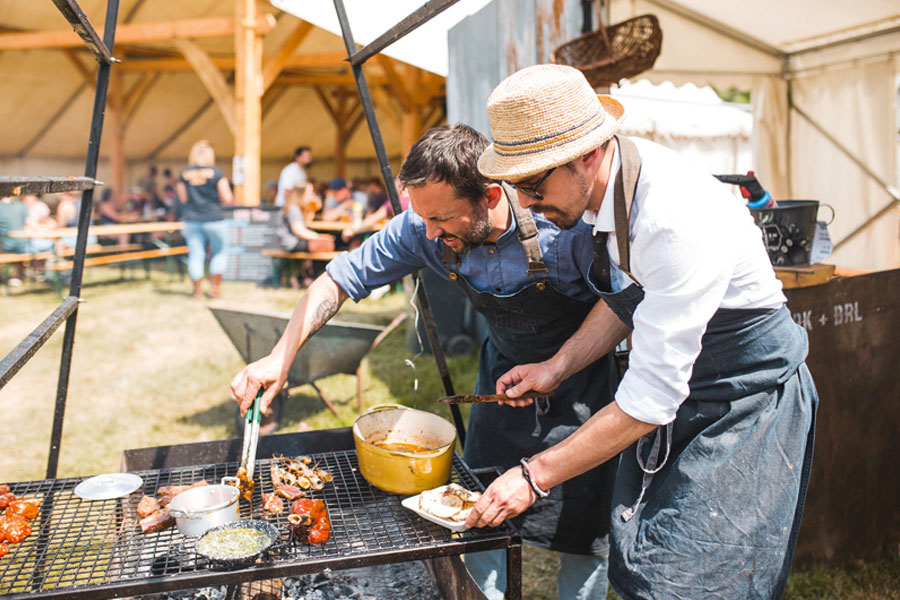 Not forgetting the music, you’ve got some great artists playing – Band of Horses and John Butler Trio to name just two. But what about those artists we may not have heard of. Who should we definitely check out?

Where to start? Each and every artist is worth seeing – 100% or we wouldn’t have booked them. But, just to name a few, if you like Kate Bush, come and see Neko Case. She is often compared to Joni Mitchell, but the American artist is much more than an acoustic guitar-playing troubadour. Case is a stunning songwriter and performer lauded by the likes of k.d. Lang and Elvis Costello – and plays to devoted audiences across the world.

Jerron Blind Boy Paxton is a startlingly original musician whose sound harks back to legendary Americana names such as Fats Waller and ‘Blind’ Lemon Jefferson. The blues, folk, bluegrass and jazz star describes his sound as ‘early American music’ and his profile rose recently after being featured heavily in American Epic, the historical BBC/HBO documentary.

The Grammy Award-winning contemporary blues hero Fantastic Negrito is another ‘must-see’ at Black Deer this year. His most recent albums Please Don't Be Dead and The Last Days of Oakland are incredible– but it's on stage that this wonderful artist comes to life. With playing as loud as his colourful attire, Fantastic is the consummate stage performer and always puts on a rock ‘n’ roll revue.

There’s lots of stuff for the kids too, right?

Sure, we have a dedicated Young Folk area, with so much cool stuff going on for the kids. They can safely climb to the top of ancient oak trees, work together to build a wild west town with the guys from Woodland Tribe or listen to stories around the campfire, practice cowboy and cowgirl skills, ride a Rodeo Bull, play games, learn forest skills, have fun in the dressing up tent, and there’s guitar lessons, face painting and loads of arts and crafts to get stuck into.

For the older kids there's axe throwing, a silent disco, archery, screen printing, a climbing wall and loads more. The kids will even have their very own Papermoon stage, dedicated to inspiring the next generation of musicians with a young artist search we're launching soon. 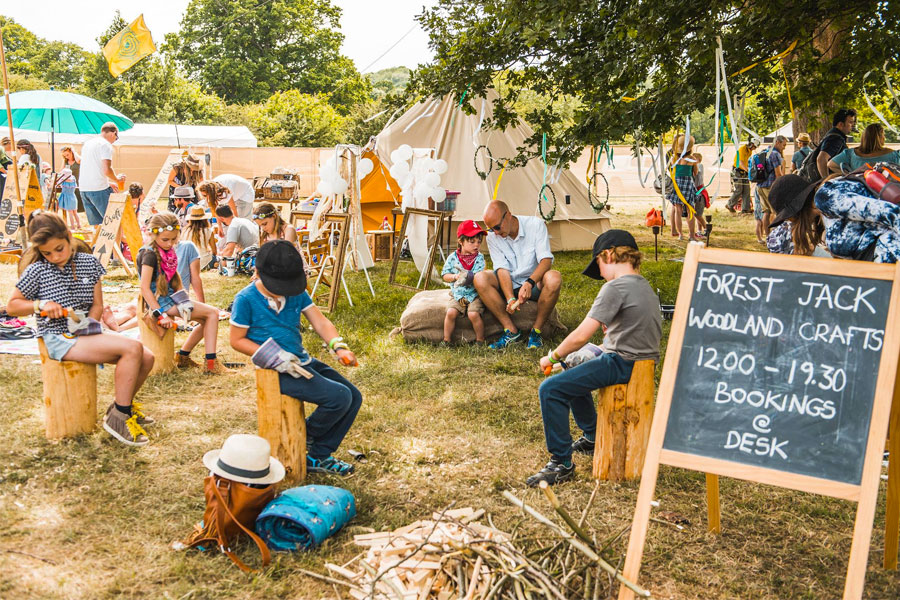 Tell us about your setting

Black Deer takes place in the sweeping grounds of one of Britain’s oldest deer parks – Eridge Park. It lies on the border of East Sussex and Kent and is about 50 minutes by train from London. Waiting for you at Eridge Park are stunning views of rolling hills, open lakes and ancient woodland – which together, provide one of the most breathtakingly beautiful, natural settings for a weekend of outdoor live music.

Being at Eridge Park isn’t only about a beautiful landscape, it’s about the potent combination of spectacular British countryside with Americana and country music – a genre with its very roots in the simple traditions of outdoor life. Eridge Park really is the perfect playground for the Black Deer festival – a venue we’re proud to call home.

And lastly, if there’s one thing we should definitely do at this year’s festival what would that be?

Get yourself down to Haley’s Bar and try your hand at the Texas Two Step or Swing Jive lessons with Hank JD Sleek. DJs Shamblin Sexton and Senor Mick of Whiskey Preachin and Big Steve Arlene will be directing the dancefloor into the early hours with a mix of the sounds of old-time mountain music, western swing, honky tonk, hillbilly boogie, swampy blues, southern rock and roll and outlaw boogie.

Black Deer Festival will take place on 19-21 June 2020. Find out more on our guide, and book your trip to this summer's festival here.