The law of averages tells us that from the sheer amount of festivals to choose from throughout the globe, you can bet your bottom dollar that at least a handful go awry.

Lack of funding, poor infrastructure, artists pulling out at the last minute, low ticket sales, the weather (almost always the weather) can contribute to an unfortunate series of events that blight months of organising (or disorganisation), typically demolishing a festivals' reputation over one misjudged weekend.

With Netflix' recent documentary Fyre, everyone saw the impending disaster snowball out of control despite ceaseless warnings from hapless colleagues, and Andy King's eagerness to ensure the festival was stocked with Evian. But there are ample amounts of other festival's that have gone to pot without quite making the same headlines.

Take a look at the shortlist that all share the mantle of 'Worst. Festival. Ever'.

A good place to start. One of the greatest festival-related scandals of recent time, if not ever, was Fyre Festival-gate.

Billed as a luxury festival-come-resort, promoted by social media influencers, and with Ja Rule backing the event, the Bahamian island-based festival was highly anticipated as you can expect.

Well, turns out that it was a total scam; those who were unfortunate enough to purchase tickets found what resembled a squat in place of luxury villas, and packaged sandwiches in place of gourmet cuisine. To make matters worse it wasn't even sunny, which made the admission price (upwards of a thousand dollars) hurt that extra bit more.

Entrepreneur Billy McFarland truly felt the fallout being sued for fraud and was subsequently sentenced to six years in prison after a criminal investigation. 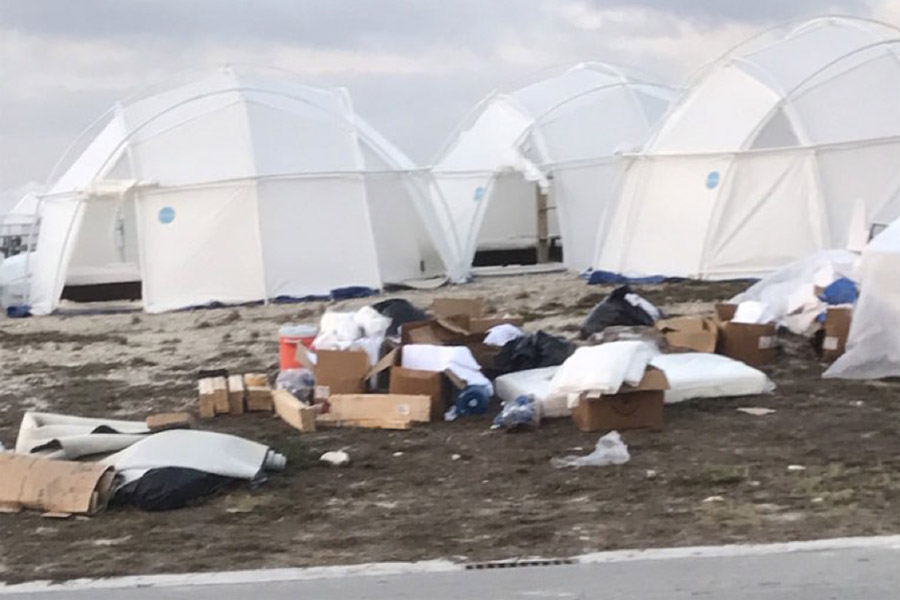 Flying Lotus, Snoop Dogg, Orbital, Richie Hawtin, Gary Numan, and Richardo Villalobos all featured on an impressively diverse lineup for 2012's Bloc Festival, with organisers shipping in a boat from Germany to host the stacked festival.

The term 'organisers' was used loosely, as drinks ran out by 22:30 on the opening night, complaints about shoddy sound quality were aplenty, these coming from the minimal number of ticket-holders that were able to squeeze on to the docked venue.

Overcrowding ensued and ensured that nearly 15,000 bewildered ravers were left cramped and stranded outside for hours until the 'organisers' put everyone out of their misery and pulled the plug. 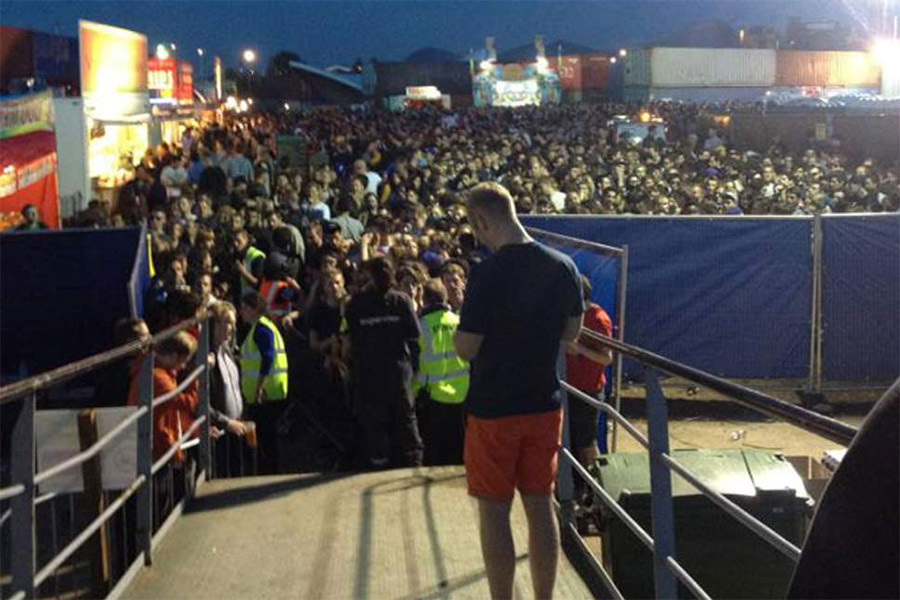 Regarded as the platform that saw EDM explode in the US, Electric Daisy Carnival is forever in-demand.

In 2010, that was more than apparent with 185,000 ticket holders, but shoddy security failed to check IDs diligently allowing hundreds of minors into the main arena, encouraging further hundreds to attempt to breach the fence.

Security couldn't handle the chaos, which lead to severe overcrowding and numerous injuries were reported.

Not to be confused with the iconic festival whose tagline was '3 Days Of Peace And Music', as the '99 rebirth was an altogether different affair.

Ironically what is now considered the antithesis to the original festival's ethos, severe water shortages, poor facilities, overcrowding, and nu-metal anthem's such as Limp Bizkit's 'Break Stuff' acted as a catalyst that saw the festival devolve into widespread riots, arson, and destruction. After feeling exploited financially, it seemed that amped-up teenagers took the song quite literally.

The Woodstock legacy, now tarnished, was put to bed swiftly after.

When a snoozy town near Chattahoochee Hills, Georgia, saw nearly 190,000 EDM enthusiasts descend on it, it wasn't the intermittent overpopulation that caused the issues. In fact, it was the elements.

Tomorrowland's US equivalent hosted EDM poster boys Martin Garrix, Tiësto, and Hardwell in their third outing, but heavy rain and flash floods hit. Approximately 40,000 festival-commuters from nearby towns were left stranded at the site with no accommodation or shelter, as organisers limited transportation services due to horrendous weather and poor road conditions. The carnage was well-documented throughout social media, with festival-goers likening it to a disaster movie.

Going by the photos it looks no worse than a rainy, mud-laden British festival, but the debacle saw the promoters file for bankruptcy the following year, and TomorrowWorld submerged into the unknown. 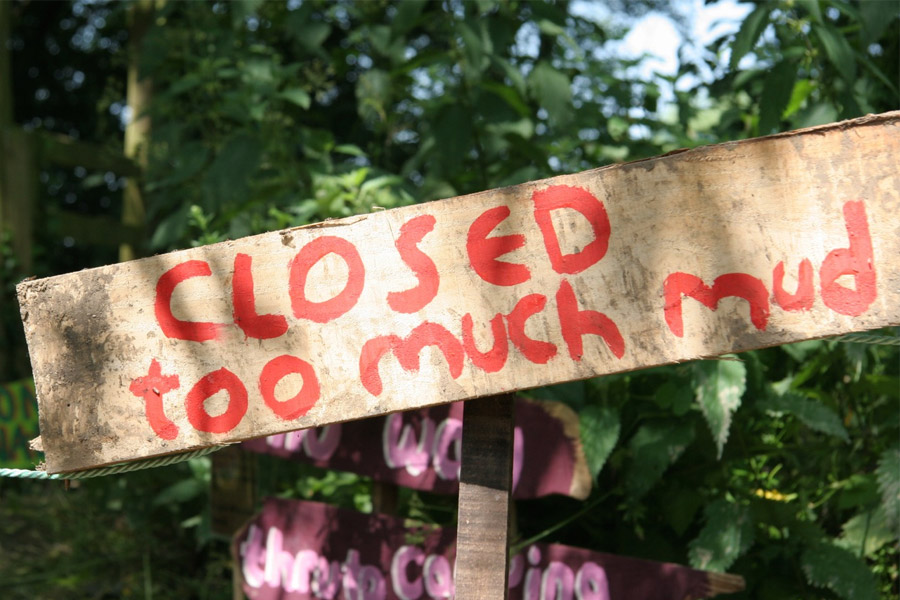 Now, British festival-goers are consigned to the fact that it'll likely rain throughout the entire summer, so we're almost certain of the weather's uncertainty. It's virtually guaranteed to rain at Glastonbury each year, and its muddiness is part of the appeal so those in attendance are relatively prepared.

Nobody was prepared, however, for the torrential rain and flash-floods in 2005, with the sludgy water rising to almost 6ft high in some areas. Electrical storms even hit one of the stages, so it was miraculous that no one was injured.

Even with Coldplay and The White Stripes gracing the summit of the Pyramid Stage, it was ultimately the atrocious conditions that stole the headlines.

For those that have been to Bestival, if people say 'the muddy one' you know precisely what they're on about.

Blessed with blissful sunshine until that fateful weekend, the (then) Isle of Wight-based festival site was in the valley of a country park, which didn't bode well when the thunder, lightning, rain, and gale-force winds came-a-calling. Floods filled the valley submerging the majority of tents, extreme winds came and blew the remaining tents away, and one of the main stages sank into the slurry beneath.

For the festival worst hit my abhorrent weather, Sled Island in 2013 has to take the biscuit for bad luck.

The city-wide music and arts festival was shaping up to be their most successful year yet, featuring the likes of The Jesus And Mary Chain and Mac Demarco on the bill. Unfortunately, the entire city of Calgary, Canada was engulfed in flooding overnight of historic proportions (mid-June no less), followed by emergency evacuation warnings from the city's council.

Having been forced to cancel hundreds of shows, promoters weren't only left with the lasting devastation from the flood but also disgruntled festival-goers demanding refunds, leaving them nearly $200,000 out of pocket. 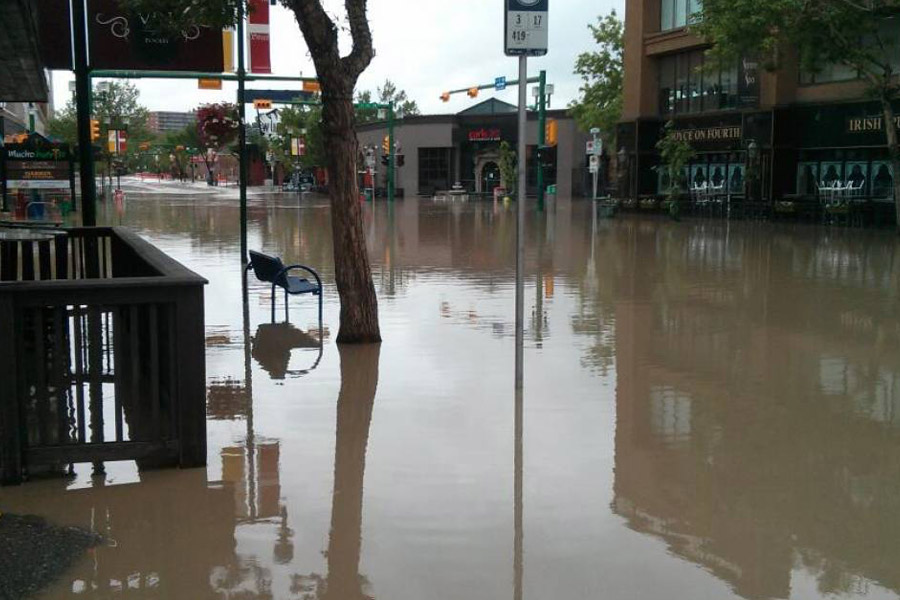 After the success of the original Woodstock, many promoters tried to replicate its significance and failed. Powder Ridge was cancelled even before it began due to a legal injunction, yet approximately 30,000 still people showed up to party. And party they did; there was little else to do with only one artist arriving to play, no water, no food, and no entertainment. 'Electric Water' (no guesses as to what the secret ingredient was...) ensured the entire weekend descended into a full-blown crisis.

To make matters worse, the organisers vanished taking the funds with them. 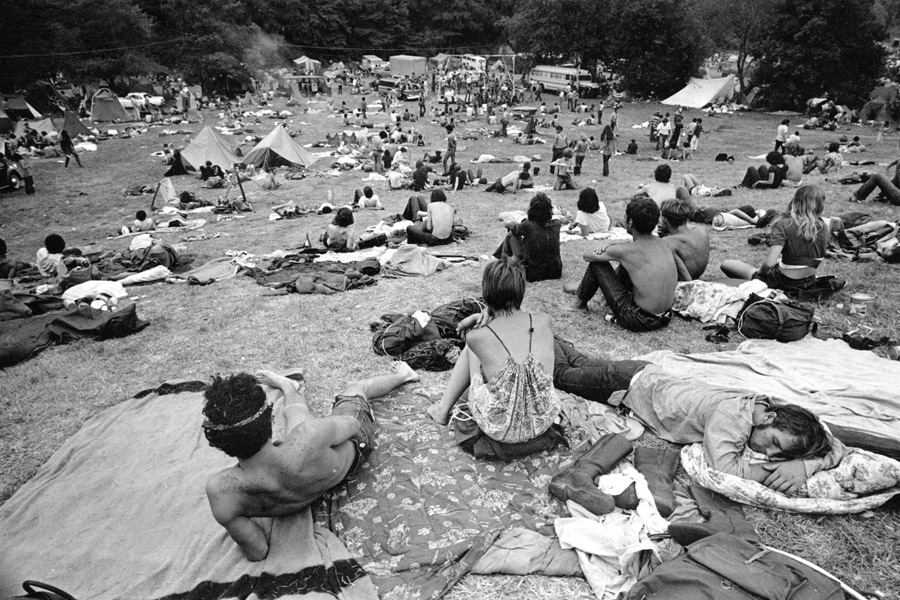 Zoo by name, zoo by nature, as ticket-holders were ostensibly treated like cattle at Zoo8 at the Port Lympne Animal Park in Kent.

Those that braved the inexplicably arduous queues to the congested campsite were met with water shortages and lack of toilets. Chuck in big-name acts like Wiley, Roni Size, and Dizzie Rascal pulling out at the last minute, and you've got yourself an animal farm, with furious and disappointed festival-goers launching bottles of urine at the main stage, getting royally off their nut in a field with no music.

The festival promoters apologised for running out of money once the dust had settled, but it didn't stop this shambles of a festival going down as one of the most poorly organised festivals in recent years.

Still, this chap remained fairly chipper in the midst of the fiasco: