The Great Escape is nearing - it's tomorrow in fact. Us musicophiles here at Festicket are taking the trip down to the sunny south coast to catch a glimpse of the industry's next major talents. We've already divulged our endless lists of budding artists we're keen to see and hear, but have somewhat neglected the city's most endearing tropes that lie within the nooks and crannies of its buzzing city streets.

In some shape or form, we all have an affinity with Brighton's welcoming vibe and libertine approach to the finer things in life. So as self-proclaimed veterans and know-it-alls of the city, each of us making the southbound journey have offered our individual insight into our favourite venues, drinking spots, and insider tips that'll warm you to The Great Escape, and it's home, even more so.

If you're ever by the seaside, I'd recommend making the most of it. Just east of the famed pier, the three TGE Beach Site stages host some of the festival's biggest names this year including writhing dance-pop lotharios Friendly Fires, scuzz-buckets Fat White Family, and the ever-loquacious Little Simz. With a crisp beverage in hand, basking in the glorious May sunshine, you'll be able to witness the sun going down across the twinkling horizon to a supreme soundtrack. Remember your suncream ladies and gents. 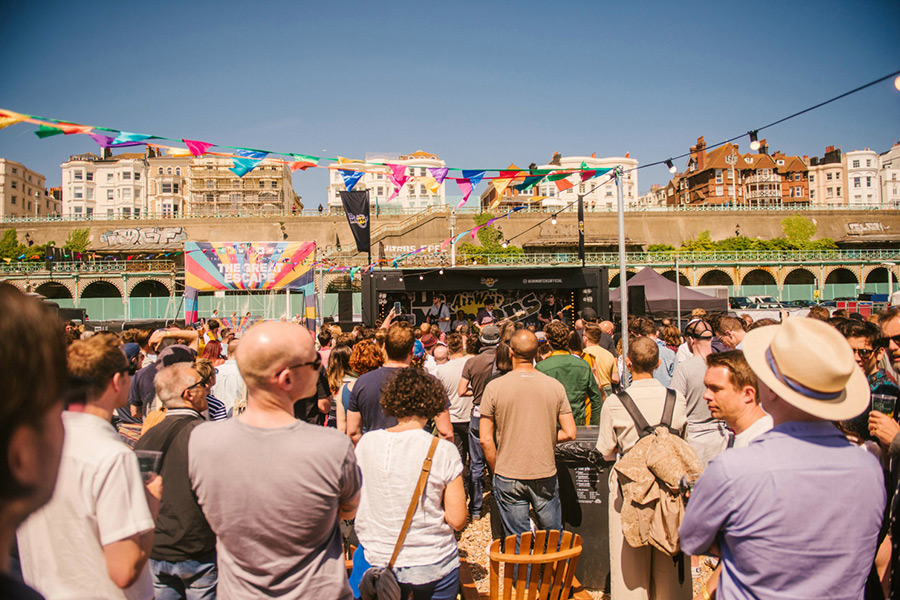 With obscure trinkets, dis-used kitchen appliances, and general bric-a-brac all lovingly thrown together to create the pub's unique mise-en-scene, The Hope & Ruin not only serves craft beers and vegan foods aplenty, but you're not very far away from the music either; the celebrated venue upstairs will host several shows throughout the course of the weekend. It's virtually a microcosm of Brighton in one pub. 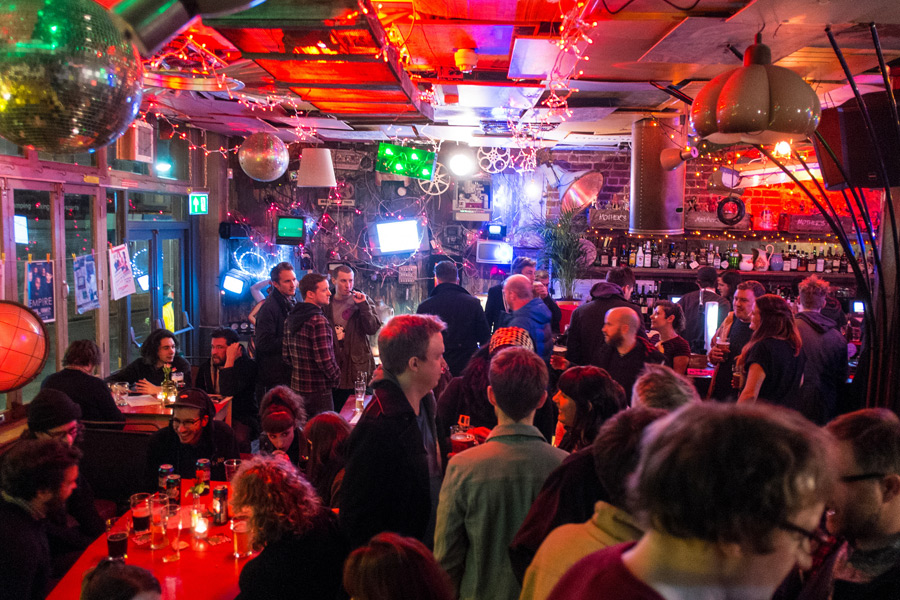 A luxurious citrusy caramel liqueur doesn't sound like your standard tipple, but I implore you to try Tuaca when you're in the city. Brighton is the only UK destination where the golden Italian shot can be enjoyed so give it a try. Just don't express your disgust if it isn't to your tastes; you'll anger the locals. 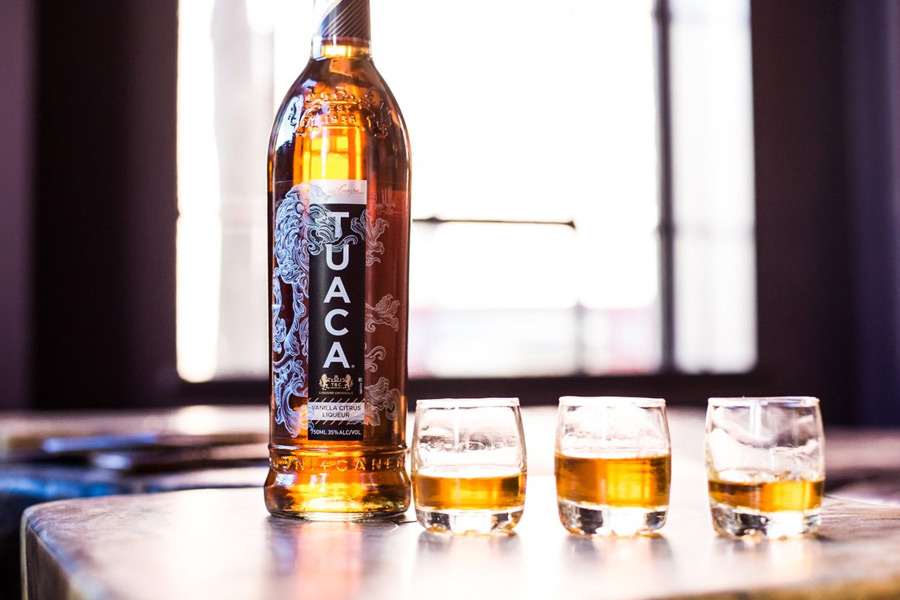 Throughout TGE, the cities current venues become the major industry hotspots and attract the buzziest artists of the moment. The Haunt is just this; a treat for those with a penchant for reverb and riffage, this year will see Black Honey, Surfbort, and Viagra Boys hit the stage. 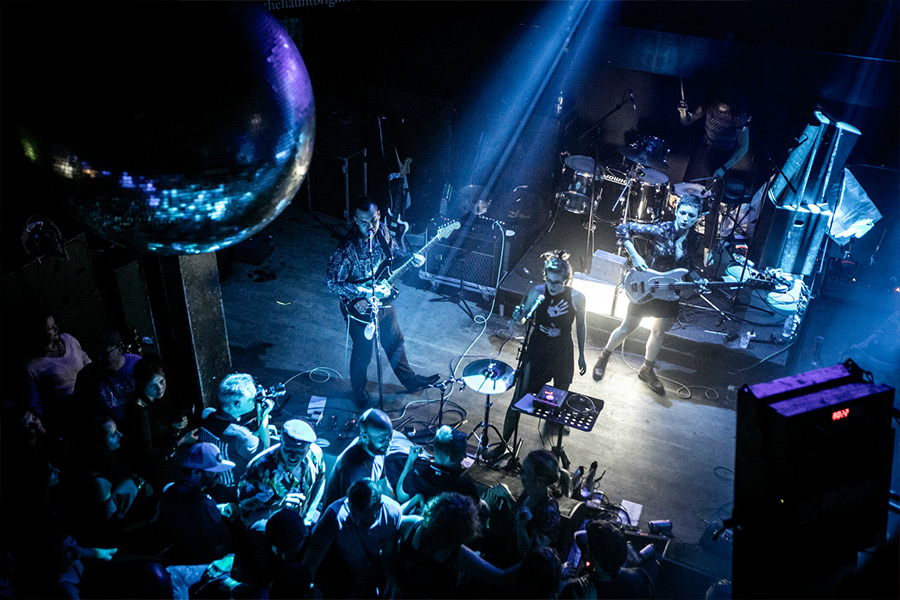 Every time I visit Brighton, I make sure I while away an evening under the dim lights of The Blue Man. Just a stone’s throw from the seafront, this cosy North African inspired late-night bar and restaurant is adorned with vibrant Moroccan interiors. As well as drinks, they also offer an extensive menu filled with homemade North African favourites, including mouthwateringly good authentic tagines that go down swimmingly with a glass of wine. If one of their wines don’t take your fancy, why not try out their speciality teas? 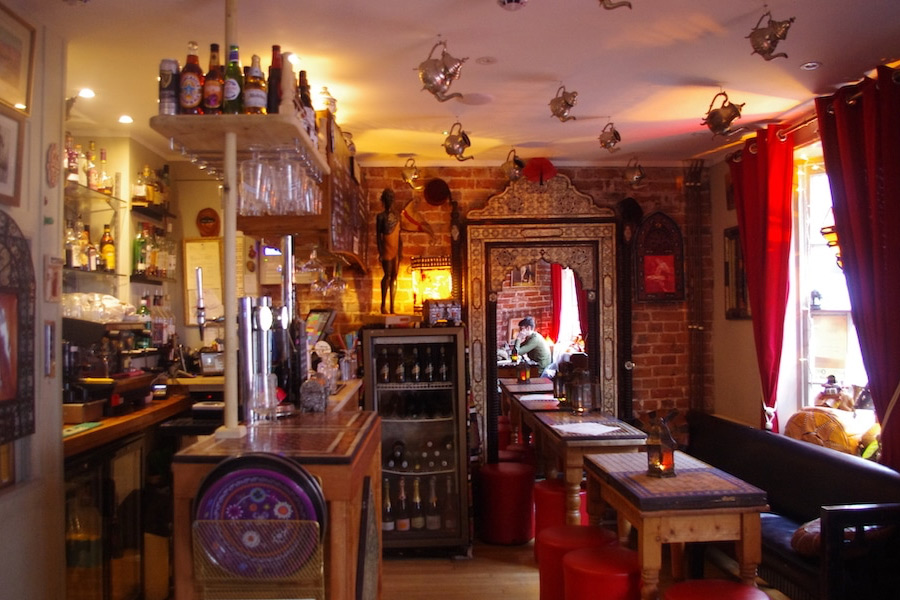 Brighton is a treasure trove for vintage clothes and antiques. My favourite places to rummage through are Waiste Vintage, Beyond Retro and All About Audrey. Also, make sure you don’t leave without exploring the mountains upon mountains of retro goods in Snooper’s Paradise, which is quite literally heaven for vintage hoarders! 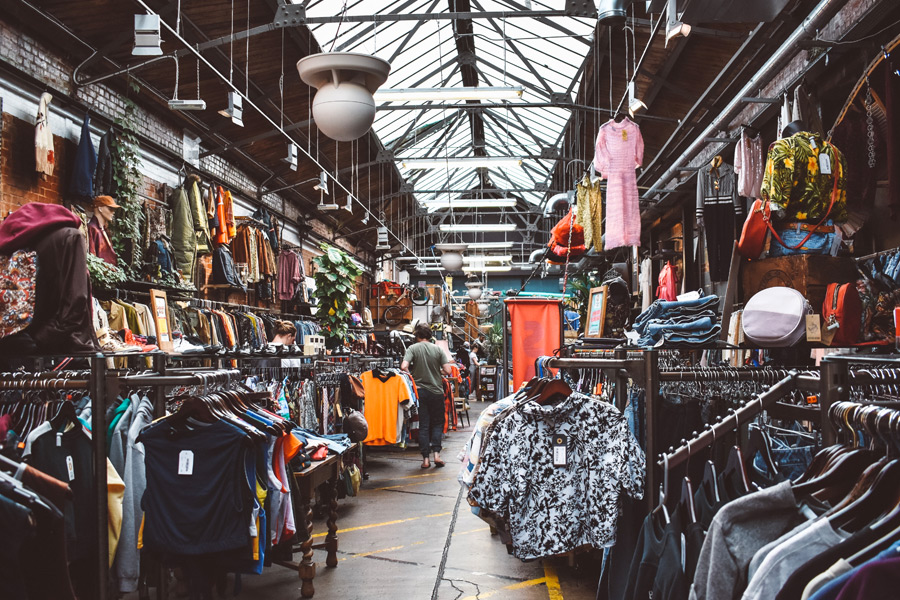 Everyone agrees that The Great Escape wouldn't be the same if it wasn't in Brighton, and there aren't many venues more essentially Brighton than Horatio's. Set on the pier in front of the precarious-looking funfair rides, the bar has this lovably tacky yesteryear feel, the kind of place a stained glass ceiling your grandparents may have gone dancing as young sweethearts on their holidays. At The Great Escape, it tends to play host to punk and alternative rock bands, with ample space to have a mosh and spill a reasonably priced pint. There's also a lush terrace out the back with gorgeous views of the city's coastline. 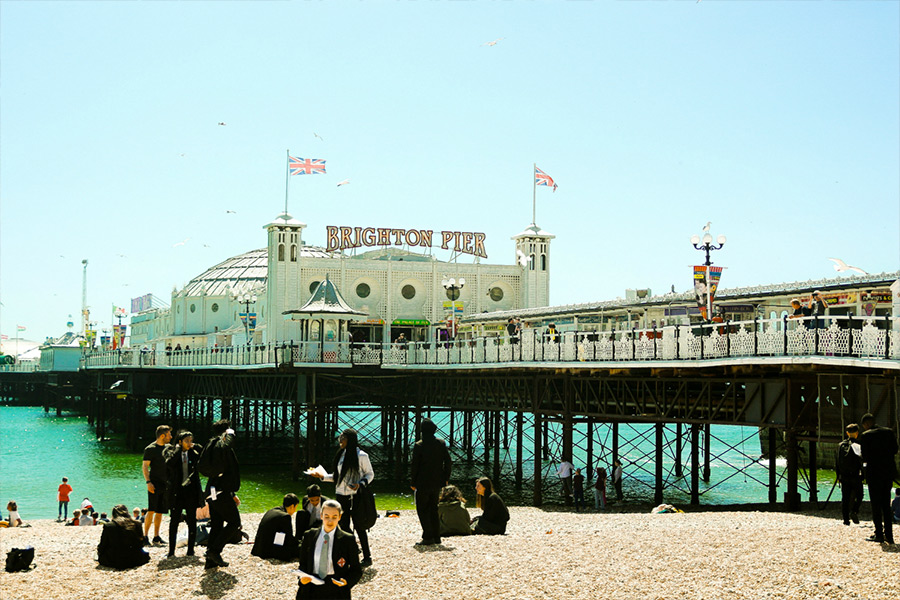 In the morning Marwood Coffeehouse & Bar, more popularly known as 'Marwood's', is a quaint spot with no-thrills but hearty brunch options. But once the afternoon draws in friends meet and mingle amongst the menagerie of random knick-knacks that adorn its walls, tables and toilets and that give it its fun and bizarre atmosphere. There are delicious European beers on tap and a selection of spirits for a decent price too, which helps. 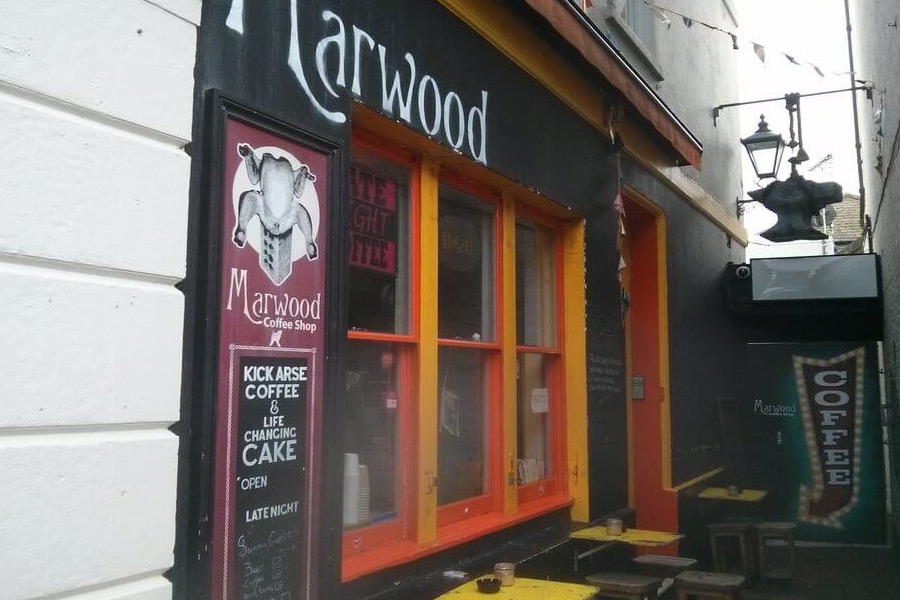 Brighton has a thriving new wave coffee scene. If you're into your speciality arabica there are options for you on almost every street. Personal favourites are Bond St. Coffee who serve beans of outrageously quality from the local Horsham Coffee Roaster, or the vibey Twin Pines on St. James' Street.

As the name suggests, this place mainly operates as a comedy club throughout the year – and a very good one at that – but with a regular programme of live music, club nights etc. During The Great Escape, it hosts two separate rooms (Komedia and Komedia Studio Bar) with a pleasingly diverse mix of styles across the course of the festival: experimental electronica from Yves Tumor, rap/grime from AJ Tracey, the angular post-punk of Black Midi, or jazzy-soul from Future Bubblers Soundsystem. 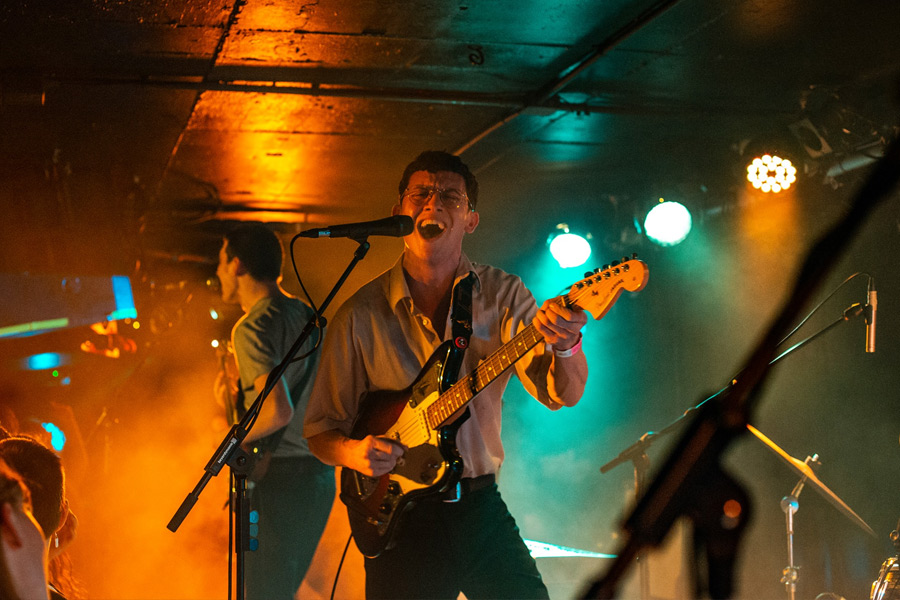 There’s no shortage of lovely pubs in Brighton (I learned recently that with ten pubs per square mile it comes in at third place on a list of all UK cities). But there’s something particularly lovely about a traditional old pub, situated on a pretty corner, serving good beer, to nice people. The Basketmakers – in North Laine, but tucked slightly away from the crowds – is a fine example of such a pub. 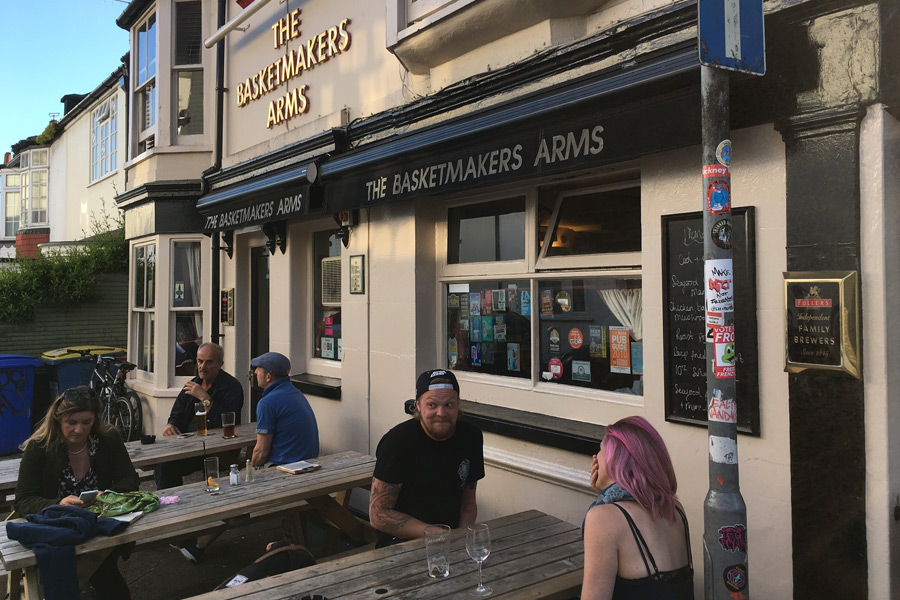 Sadly the football season is over now, so a trip to the mighty Whitehawk FC would be in vain. So instead I’ll recommend VIP as somewhere you should definitely visit. It’s an independent, charming and authentically Neapolitan pizzeria, home to its own in house deli-counter replete with cured meat, and shelves filled with other Italian treats for purchase. 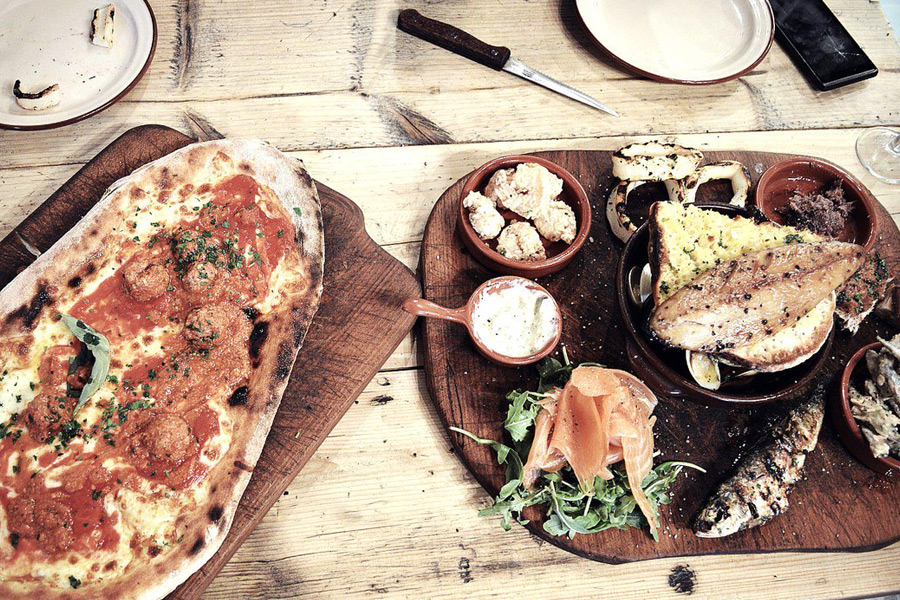