Tomorrowland Winter: What We Know So Far About The Hymn of the Frozen Lotus

The story of Tomorrowland is a monumental one. Birthed in 2005 in the small, unassuming Flemish town of Boom by legendary Dutch event producers ID&T, the one-day festival attracted around 9,000 visitors and saw performances from the likes of Armin Van Buuren and Technoboy. Though it was an impressive feat for the debut of a small-scale festival, it's unlikely anybody expected the force with which Tomorrowland would continue to expand exponentially. Over the next few years the festival grew from one-day to two-days to three-days to two-weekends long, catching in its ever-widening net international crowds and the biggest names in EDM.

But the biggest change that quickly overcame Tomorrowland was their commitment to creating an immersive visual experience, trading the flat canvas that resembled the sail of some kind of psychedelic viking ship for a stupefying swirl of colour and perspective that held a special narrative. Each year the festival saw a different but loosely related fairytale-like theme, all of which were so cinematic that if you added 'Harry Potter and the...' before them they would sound like a box office hit – no, really, it would.

Naturally, then, when Tomorrowland announced earlier this year their expansion into the snow-sports festival market there came with it the opportunity to explore new creative territory. They did not disappoint.

"Dear People of Tomorrow", a friendly and vaguely familiar old voice addressed us in the first announcement teaser (see below). "There is a myth about about an uncommon flower carrying the true essence of winter, so powerful it had to be protected from mankind. Once this lotus blossoms it releases thousand of frozen crystals." And thus, The Hymn of the Frozen Lotus was born.

Though it probably wasn't OK to feel festive and wintery back when it was announced in March, with a cold bite to the air now the time to get excited about Tomorrowland Winter is certainly nigh. So what do we actually know about the festival so far?

Trust Tomorrowland to bring out the big guns early. In September the festival revealed their first line-up announcement, including OG Armin Van Buuren, EDM wiz-kid Martin Garrix, and fellow Dutch star Afrojack, plus Steve Aoki, Dimitri Vegas & Like Mike and Nervo. The Tomorrowland veterans appear in a particularly Game of Thrones-style promotion shot below, the highlight of which perhaps being a levitating Aoki who appears far too zen for any cake-throwing antics.* 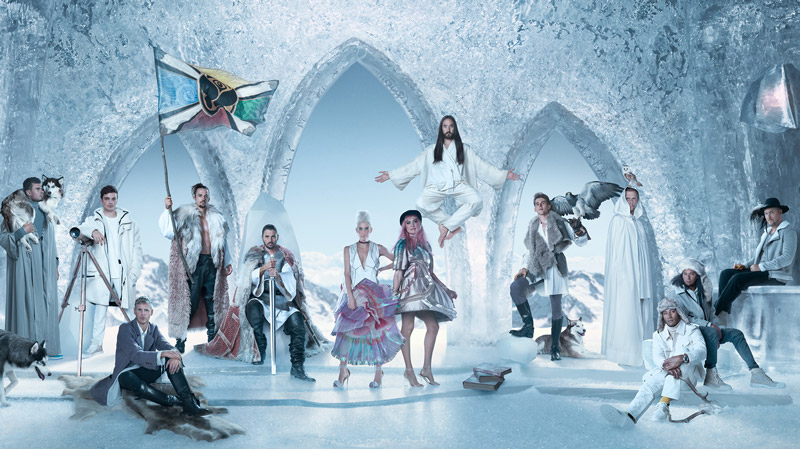 *Don't worry, there will most likely be cake.

2000m in altitude, Tomorrowland Winter takes over the whole of the village of Alpe d'Huez in the French Alps. The resort is made up of almost half and half beginner/intermediate and advanced/expert ski runs, with plenty of après-ski opportunities in-between.

Its mountain location altitude means that rather than a weekend the festival takes the weeklong holiday form like several other snow festivals. All the packages include a ticket, accommodation and ski & lift pass. There are 30, 000 tickets available, meaning the festival will quite literally take over the mountain in this time.

Though part of Tomorrowland's appeal is its mystery, a concept animation (below) suggests that there will be different stages across the mountain and village. Expect gorgeous and hallucinatory hues of deep blue, silver and magenta as, presumably, the frozen lotus finally thaws and releases its frozen crystals. Magic, right?