Since their formation very nearly half a century ago – as the 1960s made way for the 1970s – the number of artists, composers, bands, and performers that have seen their art shaped by the enigmatic German four-piece is immeasurable.

While lineups have changed and media limelight has been shunned, the last 50 years has seen Kraftwerk continue to evolve, innovate and excite. Here are just a handful of the milestones and moments from the lifespan of these iconic robots.

Although actually their fourth album, Autobahn is arguably the group's magnum opus. While the three albums before still had a footing in experimental, alternative and avant-garde rock music, this record saw a move towards an almost exclusively electronic sound; one that would shape the future of music forever.

It was also the success of this album that facilitated the band's first major tour, laying the groundwork for the types of live performances that have become synonymous with the group.

Below is the title track (and side one of the album) in its full 23-minute glory.

While Autobahn may be more significant given it was the first of its kind, there's an argument that Trans Europe Express is the most influential. Joy Division frontman Ian Curtis reportedly made the band listen to the album every time they were about to go on stage. Any number of publications across the world have featured it in their lists of the greatest albums of all time, with the LA Times calling it "the most important pop album of the last 40 years".

The album further cemented the bands move away from the Krautrock of their earlier work, refining the more melodic elements of their new electronic stylings to create a sound that once again helped to transform music as we know it.

2003 - Tour de France Soundtracks and a return to touring

Although the famous track 'Tour de France' had been released initially in 1983, it was a full 20 years until it featured on an album (albeit in a rerecorded form). Tour de France Soundtracks marked the first album from Kraftwerk in seventeen years, and it remains their only studio album of this century to date. It also coincided with a more extensive touring schedule after nearly 25 years in which live shows had been few and far between.

For the last decade, a huge part of what Kraftwerk have offered in their live experience is a 3D show. Concert-goers are given 3D glasses which bring to life the special background graphics and enhance the multimedia aspect of the show. This was debuted in 2009 in for shows in Germany, Denmark and the UK, and it was at the latter where they added an even more impressive element.

Accompanying their performance of Tour de France at the Manchester International Festival, four Olympic gold medal winning cyclists from Team GB – including future Tour de France winner Geraint Thomas – rode around the velodrome in which the show was taking place. You can see a clip of that moment below (from around 4:00 minutes) featuring an interview with the cyclists themselves, but the whole feature from BBC's The Culture Show makes for interesting viewing.

2019 - Bluedot Performance and a 50 year anniversary

As well as appearances at the likes of Best Kept Secret, EDP Cool Jazz, Tauron Nowa Muzyka and Metronome Festival, and an upcoming headline set at BIME Live this November, 2019 saw Kraftwerk top the bill at Bluedot Festival in the north of England.

It's hard to think of a festival that better suits the robotic four-piece, given Bluedot's celebration of science, innovation and technology, and its setting at an observatory. With the festival marking 50 years since the moon landing, Kraftwerk stepped up to the plate as they near their very own golden anniversary, and they delivered in the way they know best. 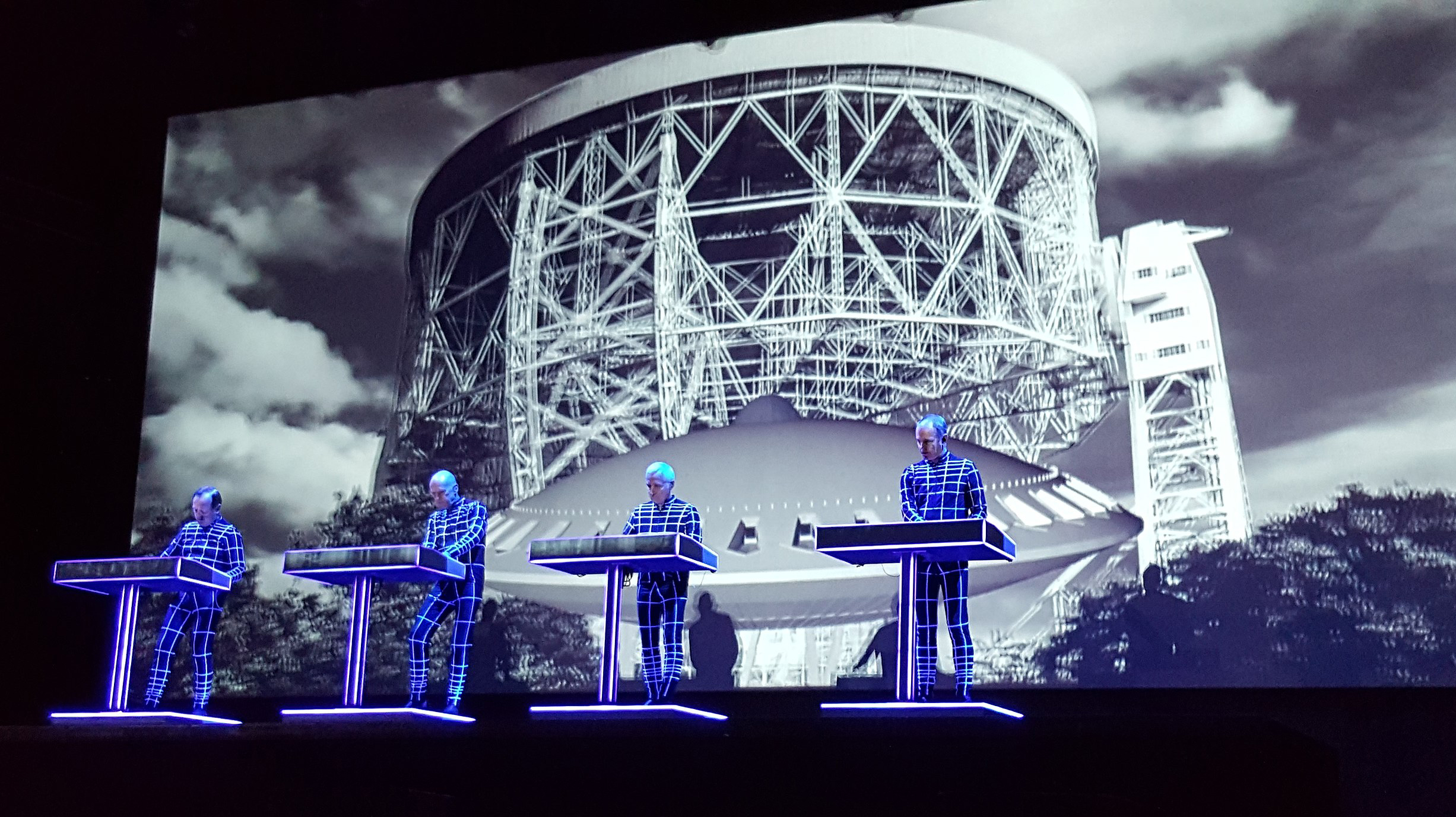