Mad Cool Festival 2019: Everything You Need to Know

Despite only launching in 2015, Mad Cool Festival has quickly become one of Europe's biggest and best music festivals, helped in no small part by the huge investment in the lineups across the first few editions.

In two weeks' time, music fans in their tens of thousands will once again make their way to Madrid for another three-day musical spectacular in the north of the Spanish capital. So with all that to look forward to, we answered the key questions about the modern festival giant.

The main festival consists of three full days on Thursday 11, Friday 12, and Saturday 13 July. However, there is also an official welcome party taking place on site on Wednesday 10 July with a number of performances (more on that later).

The festival returns to Espacio Mad Cool, a site in the north of the Spanish capital that became the home of the Mad Cool Festival for the first time last summer; the event having previously been held at Caja Mágica.

The closest train station to the festival site is Valdebebas, served by the C-1 line of Madrid's commuter rail network (Cercanías Madrid). This station is located on the edge of Espacio Mad Cool and has direct services to and from Atocha and Chamartín – the two largest railway stations in the city – as well as Madrid–Barajas Airport.

You can also reach the festival on the Madrid Metro, taking a Line 8 service to Feria de Madrid. This will require a bit more of a walk to the festival site from the station, but it's still definitely a viable option.

Topping the bill for the forthcoming edition are Bon Iver, The Cure, The National, Smashing Pumpkins, and Prophets of Rage. But there's enormous musical talent throughout the lineup, from soulful hip-hop legend Ms. Lauryn Hill and dance music veterans The Chemical Brothers on Thursday all the way through to indie-pop darlings The 1975 and ambient electronic favourite Jon Hopkins on the final day. Have a look at the full daily lineup, including set times, below. 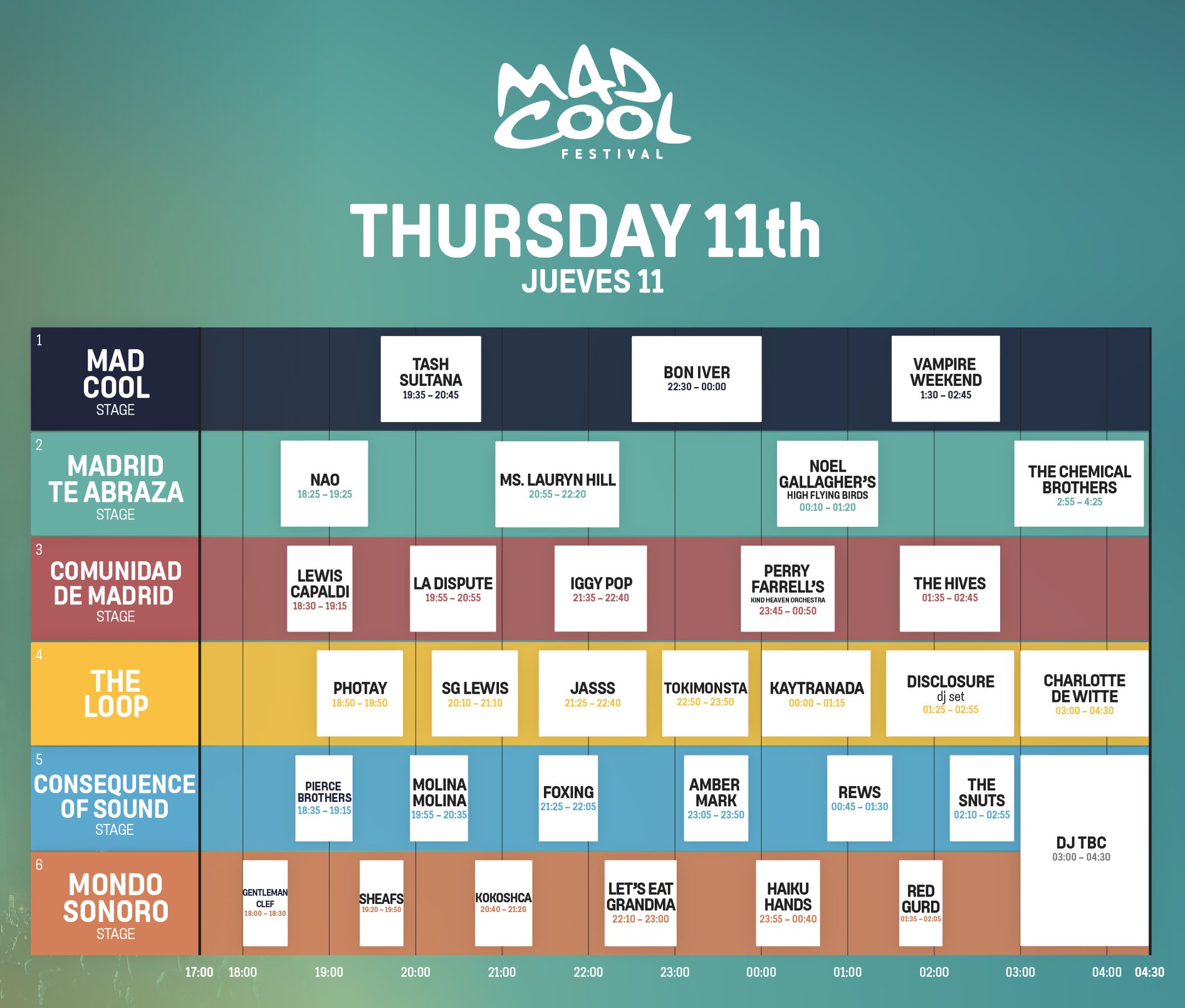 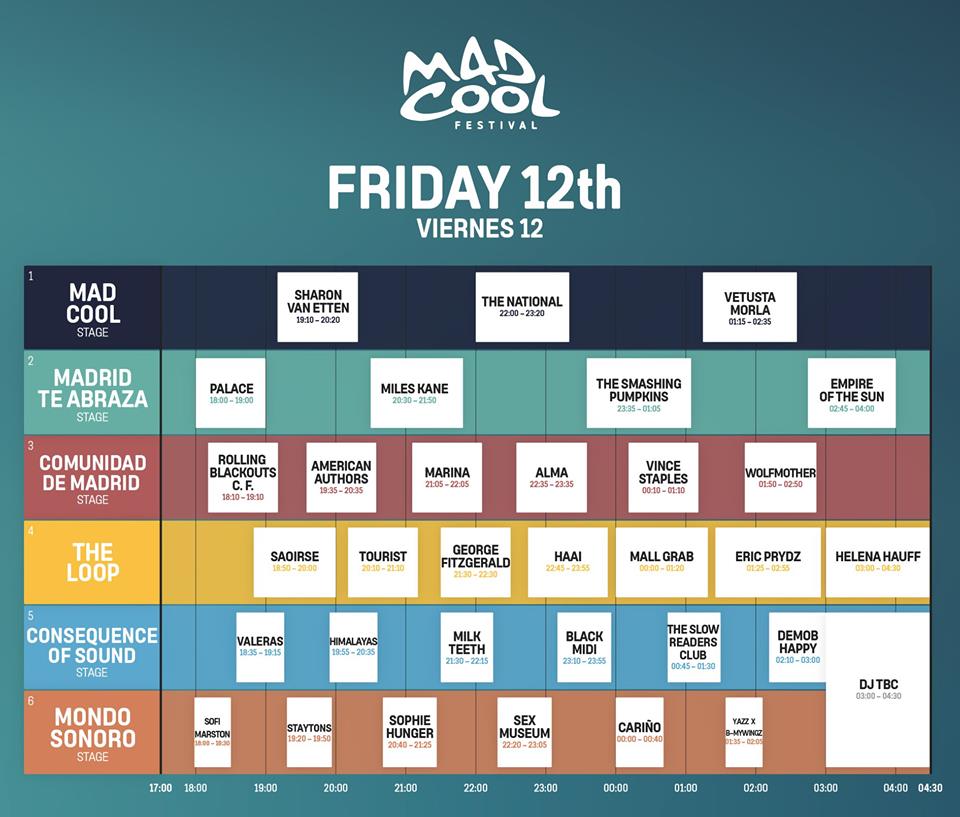 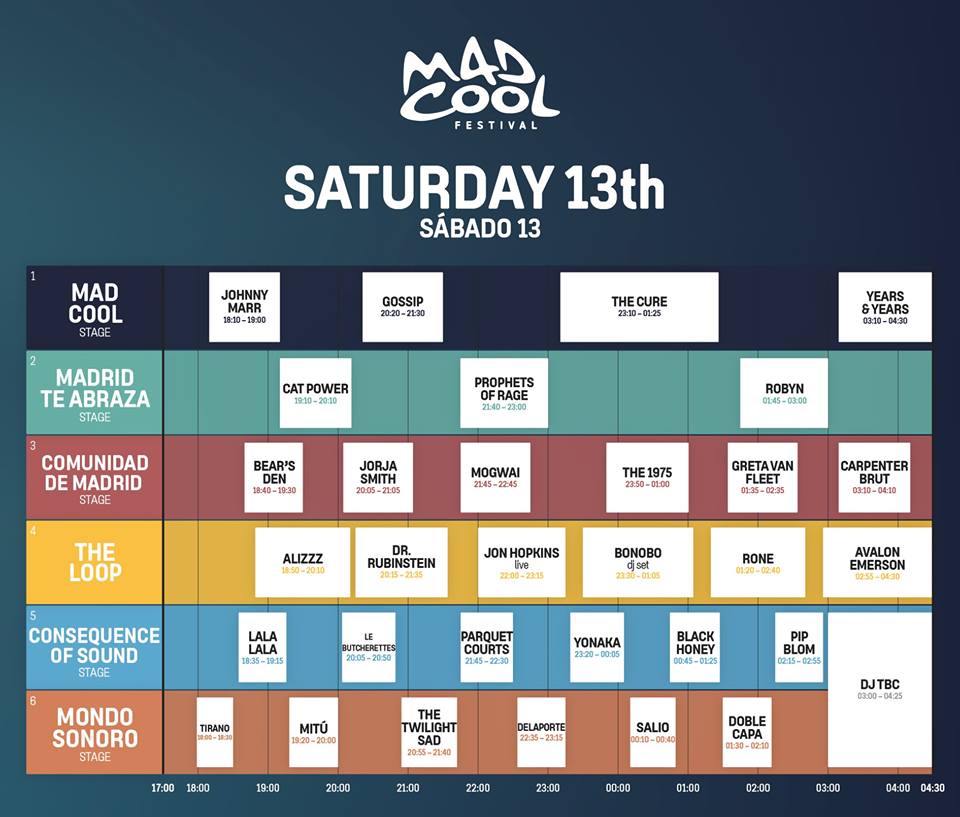 For those who fancy an extra days festivities, there's the Welcome Party taking place on site on the Wednesday, with performances from ROSALÍA, Bring Me The Horizon, Metronomy, Lykke Li and more. More information and tickets here.

Check out last year's aftermovie and see for yourself...

While rock, indie, and alternative music might take the highest billing at the festival, the expansive programme also offers up plenty of other styles and sounds. From glossy Scandi-pop through to the most unrelenting techno, and lots in between.

Have a listen to our playlist to get a flavour for the sort of things you can expect to hear across the three-day fiesta.

It might a little bit early to say with any certainty, but you can pretty confident that it will be hot and sunny. Current predictions suggest that the weekend of the 28-30 June could see temperatures hit 40°C, with highs for the first week of July dropping down to a slightly more bearable 35°C, and long-range forecasts saying it could be more like 32°C on the weekend of Mad Cool Festival. So bring sun cream and a hat, and make sure to drink plenty of water.

Can I still buy tickets?

Yes! The last remaining tickets for Mad Cool Festival 2019 are available here, along with packages, accommodation, travel and extras.