Coachella happened, Kendall Jenner broke out the sequins, and there's almost some sun in the sky – festival season is officially upon us.

In honour of that perfect print you've been searching for, your favourite new babein' bralette, or the on-point pencil skirt that'll complete your outfit, here's our Ultimate Festival Fashion A-Z for Summer 2017.

Retro Americana ticks so many great boxes, especially if you let the Gingham shine. Half tuck a shirt in to denim cut-offs for the daytime look, or go full Lana Del Rey with a sixties shift and ballet flats when times call for a bit more glam.

Bomber jackets are fighting it out with bralettes and bra-tops here, but you know what they say – when in doubt, ask Gigi. And Gigi says go with both. 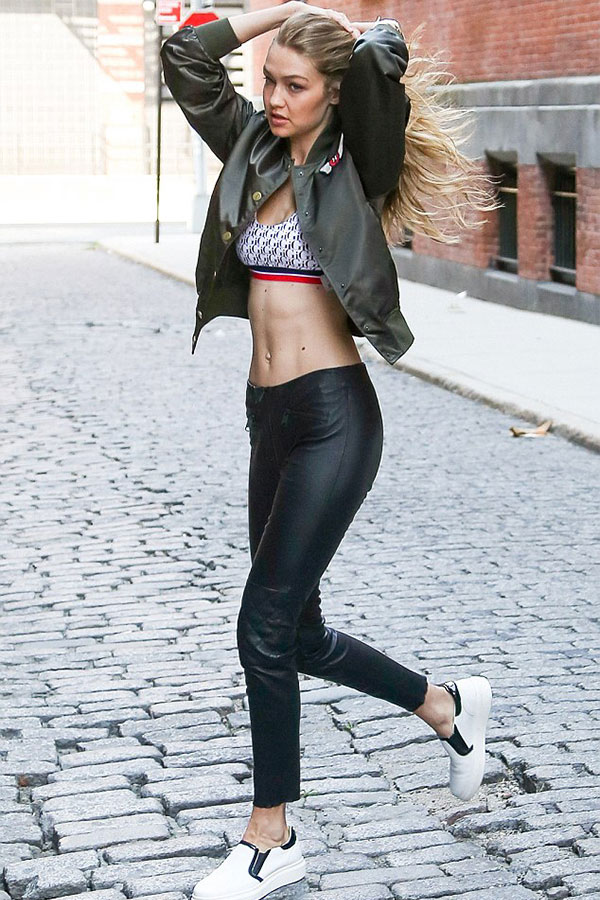 Gigi Hadid says yes to a bomber and bralette combo

It's over a year since Taylor Swift asked on Instagram, "I feel like maybe chokers are the new flower crowns?" and the tight-fitting 90s throwbacks aren't letting go of their festival throne any time soon.

Denim, because duh. Jackets, shorts, dungarees/overalls, denim dresses and high-waisted jeans will almost certainly feature in your festival wardrobe at some point this summer.

Espadrilles and espadrille wedges take the idea of versatility and give it a few more ideas, just to be sure. Light denim jeans and a casual tee, or high-waisted shorts and a bra top are a good place to start.

Fringing was huge at Coachella 2017, where Alessandra Ambrosio flew the fringed flag with distinction. Pair a jacket with Cuban heels, or fringed moccasin boots with a Mexican blouse.

Oh, and F is definitely still for Fedora, too. 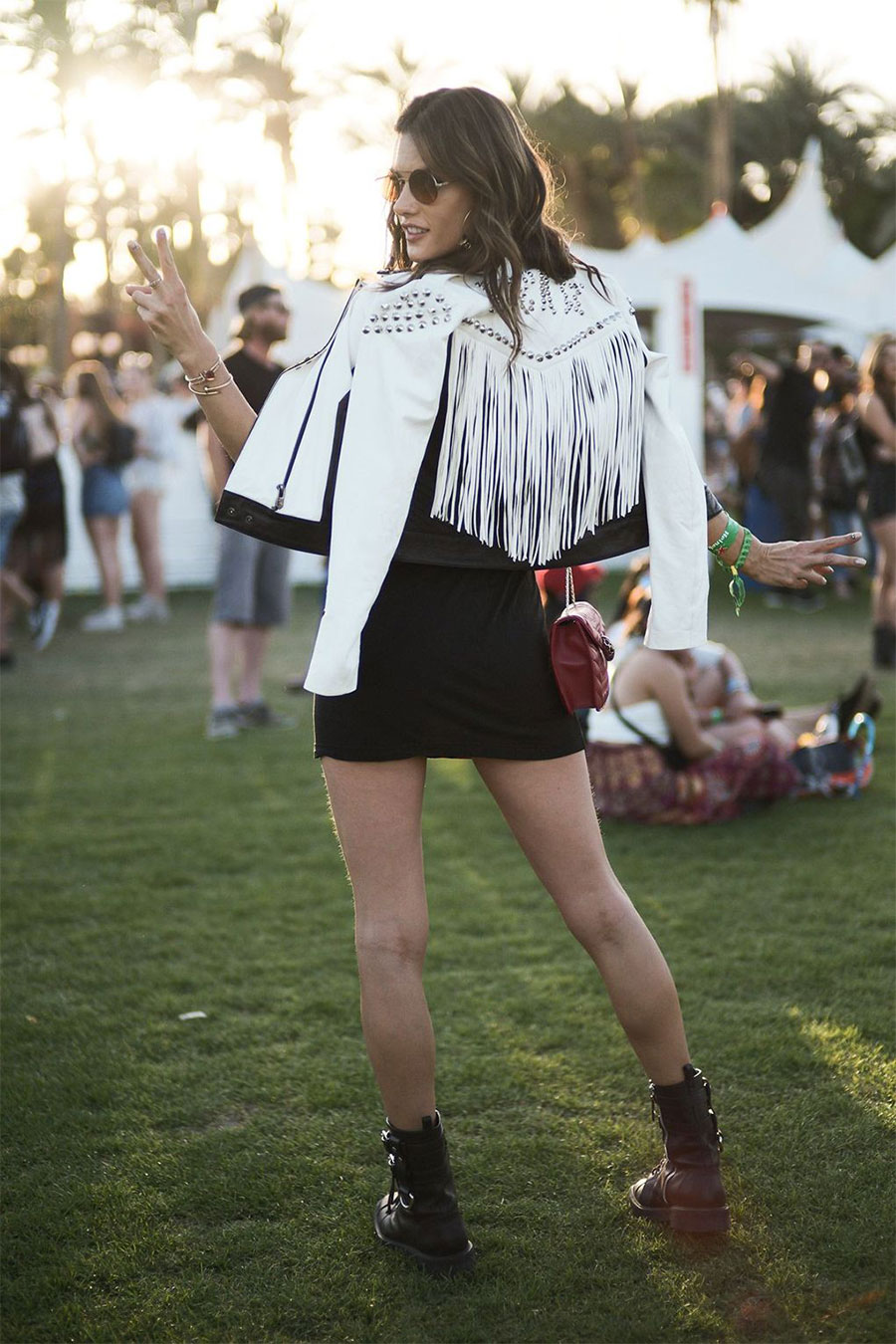 Glitter, because, well… duh again. It's the tried-and-tested highlight of any festival makeup bag, and a glorious excuse to bare as much skin as possible.

As an added bonus, if you're feeling very flush, it's Gucci tees this summer. Online searches went up by 203% on the first Saturday of Coachella 2017, when Rihanna paired hers with a sparkly bodysuit.

Braids are still an unbeatable go-to look for festivals, and judging by Coachella, mermaid hair is trending big. Make those locks really pop with a pastel colour hair chalk.

Iridescence isn't normally a word I'd use, but it'll do. Festival season is the time to go crazy for all things shiny and shimmery, so the sun – and disco lights – can glint and gleam in step with your every move.

Jumpsuits can look elegant in the extreme, but for your own good, please just take a few moments to think about the practicality (and the same applies if you're wondering whether to pack a romper). Need more of a hint? Scroll down to P for Playsuit, and thank me later.

Kimono. Let a stunning print fall from your shoulders, adding simple class to a skin-tastic outfit. 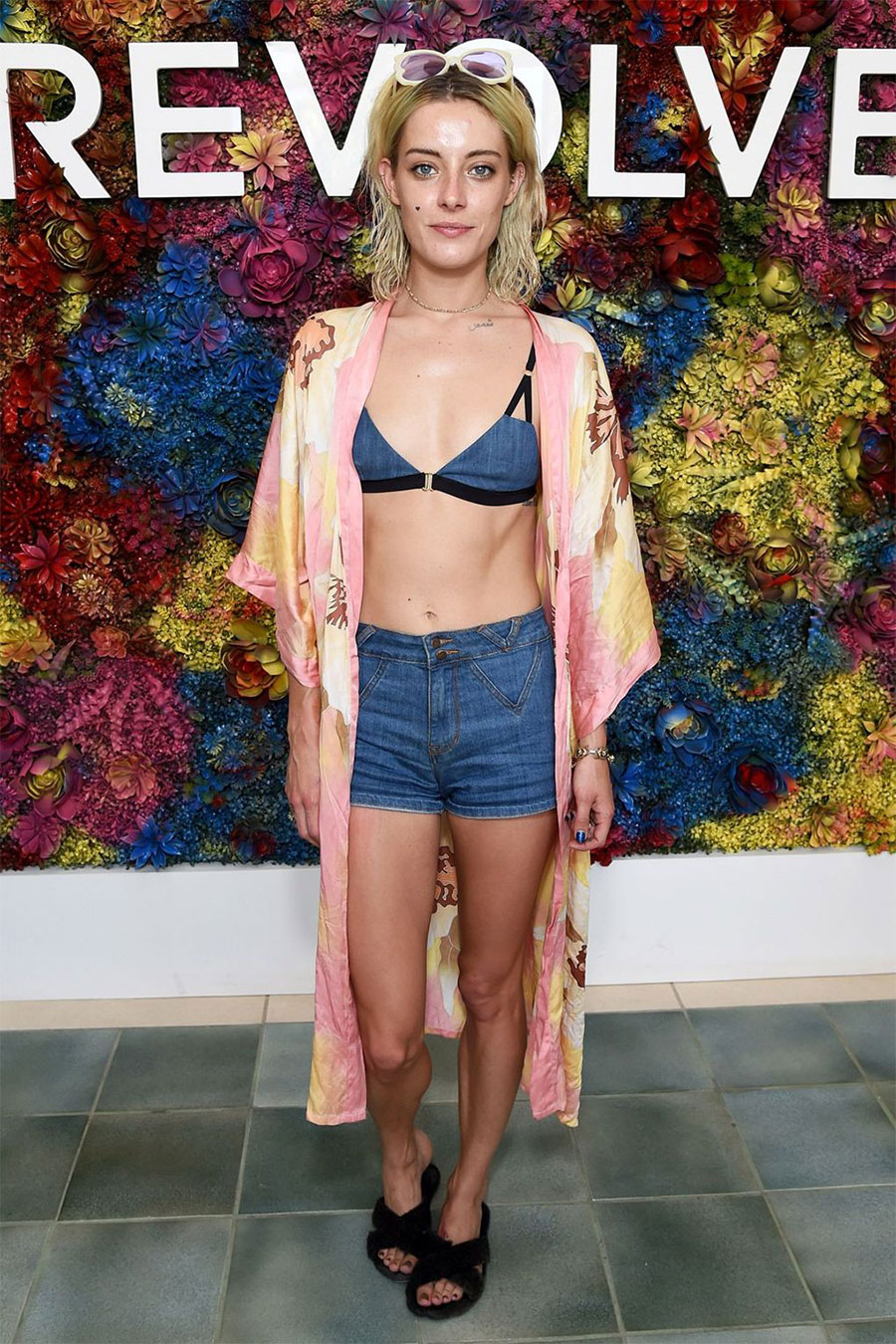 Chloe Nørgaard in a luscious kimono at Coachella 2017

Lace-up sandals are pretty much the best gift you could possibly give to your legs, especially if they have a little heel. They naturally fit a classic bohemian look, but are equally stunning with a white tee and boyfriend jean combo.

Mini rucksacks: bringing the cool and freeing up hands all over the world, right across this year's festival season.

Nineties slip dresses are a classy way to make sure you're prepared for any weather. Layer it over a t-shirt for an average-to-cold forecast, pair it with a long cardigan and fedora if the clouds look like they might part, or let the dress take centre stage when the summer really turns up.

Off-the-shoulder is this season's stand-out neckline. Go for bold, block colours or a soft floral print, and lace-up sandals or espadrille wedges. 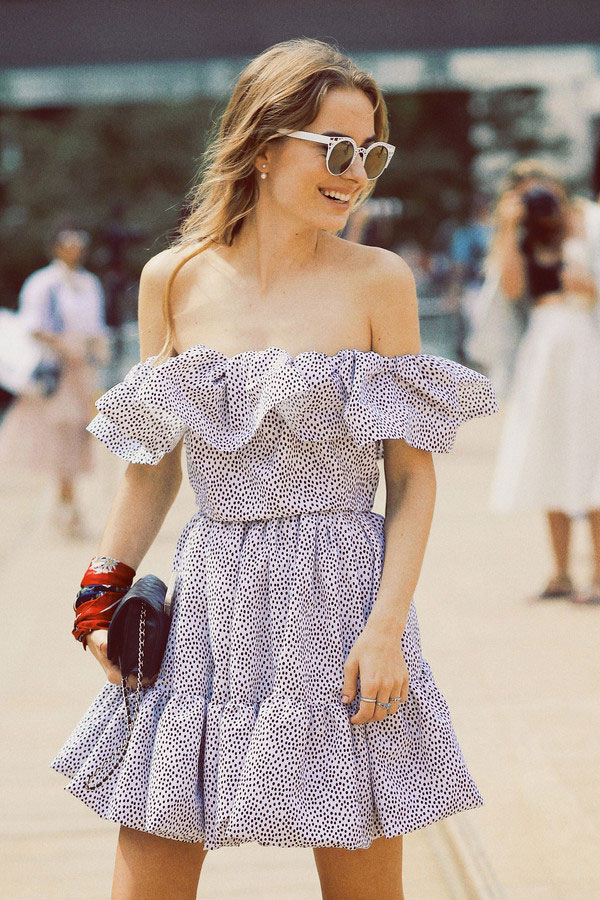 Off-the-shoulder is this season's stand-out neckline

Ok it's time to call it as it is. Everyone loves a playsuit – they're super cute, and perfect for the summer weather – until you come up against every festival-goer's mortal enemy: the portaloo. So do yourself and your fave playsuit a favour, and leave it at home.

In fact, go for a pencil skirt instead, and you'll have a much less… awkward weekend.

Yeah it's convenient – I breathed a sigh of relief when I realised Q wouldn't have to be quilted jacket or quinoa – but that don’t mean it ain't true. Quartz crystal necklaces are everywhere, and they're totally at home in that free-spirited look.

Round mirrored sunglasses. It's a no-brainer, just get some.

The greatest mistake you've ever made is shying away from sequins. It doesn't need Kendall Jenner to look exquisite in a dazzling bralette to show why they're a near-guaranteed winner, but it helps. 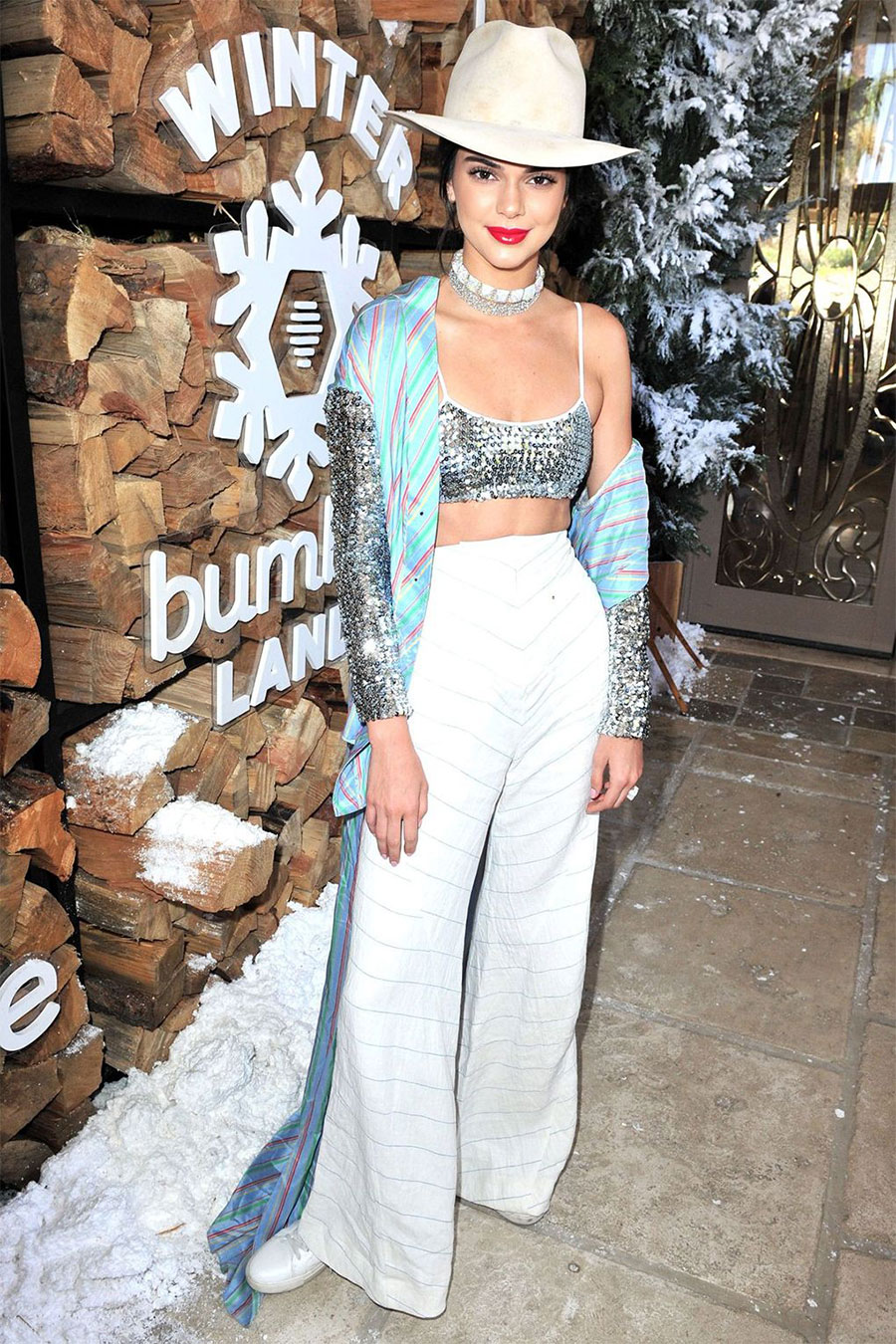 Kendall Jenner in a sequin bralette at Coachella 2017

Transparent poncho. Let's face it, chances are it's going to rain at some point; and when the heavens open, the last thing you want is for your carefully chosen, head-turning outfit to be hidden from the world before its time.

Underwear as outerwear is nothing new, but daring to bare is a sure-fire way to make sure all eyes are on you this summer. 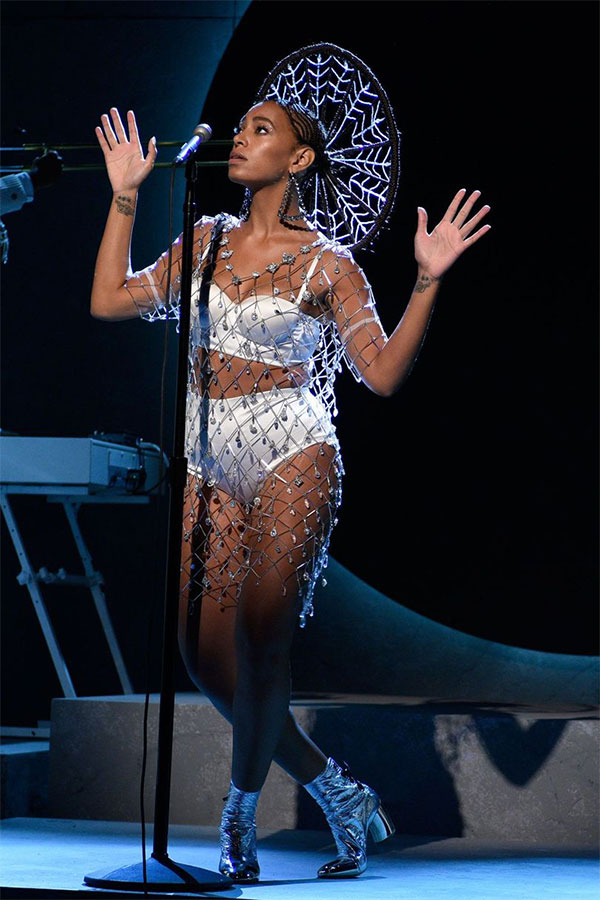 Solange Knowles, in underwear as outerwear

Vintage band tees are a timeless classic, and you've got your pick of The Rolling Stones, Ramones, Nirvana, Led Zeppelin, AC/DC, Iron Maiden…

A mud-covered field is nothing more than a platform to look amazing in a pair of wellies. And for that, Great British weather, you're (almost, sort of) the envy of the world. 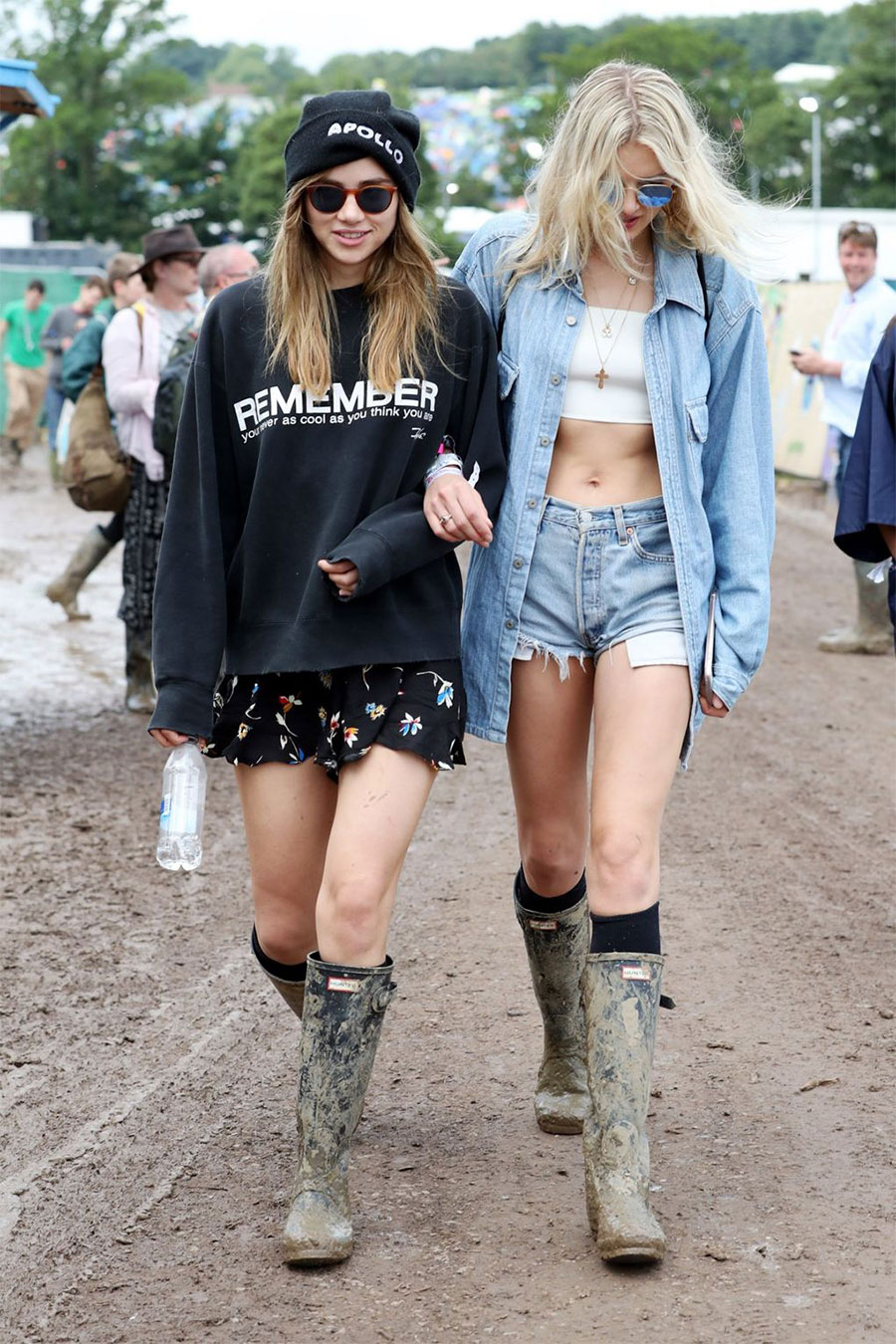 X-strap tops or sandals, I don't mind which – at least it gets X covered without a xylophone or x-ray in sight.

Yurts may not strictly speaking be a fashion item, but if you want to look good from every angle and in any situation, then you're going to have to embrace the glamp. A yurt will even set off your outfit nicely if you're going for boho, fringing and all.

Zebra print. Don’t do it, but look, the end of the alphabet gets really hard, ok, and I needed a Z. If you really want to be spot-on this year, go with Leopard or Cheetah.

This article is in collaboration with Zalando. For more festival fashion ideas, head to Zalando's Forever Festival feature and shop some exclusive looks.