Angerfist: "It’s not a bad thing that hardcore is getting more popular worldwide"

Hardcore: the sub-genre of electronic music that crams in as many beats per minutes as is humanly possible has resulted in one of the most fervently adored and individualist club cultures to emerge over the past quarter of a century.

With genuine sub-cultures dwindling, the prominence of hardcore as the last bastion of underground phenomenons is apparent. Dedicated music festivals such as Syndicate, Free Festival, and Ground Zero achieve steady success solely because of this base of devotees, with new major festivals like Revolt launching off the back of the loyalty to the sub-genre.

Particularly in central Europe, however, hardcore has begun to bubble over into the mainstream consciousness with an increasing amount of dance music festivals catering to this unique sub-culture. With high-profile slots at festivals featuring a wider demographic - Nature One, World Club Dome, and EDC Las Vegas for instance - is Angerfist, the undisputed heavyweight champion of hardcore for some years now.

A penchant for the theatrics, violent iconography, and thundering levels of BPM himself, Angerfist aka Danny Masseling took some time out to discuss hardcore's mainstream potential, and his cherished connection with the sub-culture.

The last time we spoke, you highlighted the impact that horror movies have made on your creativity. That’s evidently still the case (‘Pennywise’ for example), but what else has your music drawn from since?

I can get inspired by anything. I listen to all types of music and any good track can be inspiring. Also, music is emotion. Which basically means a 'happy' or 'sad' mood can also inspire.

It’s hard to put your finger on and depends on many things. Sometimes you just have good ideas and can spend many hours in the studio, and sometimes nothing comes out. And indeed, I still enjoy a good horror film, for entertainment and for inspiration.

A number of masked artists have uncovered themselves at some point in their career, to start new chapters within their narrative. Can you envisage yourself ever taking this route, for instance, if the Angerfist persona no longer acts as a source for inspiration?

That is very unlikely. Angerfist is my life. It’s what I am and have been for the better part of my life. Part of the success is the mask, the name, and the overall image. I don’t see any reason to change that. I like it the way it is.

Your recent music video for ‘Critter’ had a ‘video diary’ quality to it. Do you think it’s important for your followers to gain some insight into your world, and what was the initial concept for the video?

The 'Critter' video is simply a compilation of numerous shows throughout 2018. I didn’t create the megamix that I usually do at the end of the year, so decided to put all memorable footage into a video for my new track at the time. I like this idea and might do the same again next year. I’m not really a 'vlog-type' artist and don’t share that much of ‘my world’ outside of the gigs, backstage, etc.

In an era of mass-streaming and social media saturation, do you find it easier or more difficult to connect with your fanbase?

Social media makes it a lot easier to connect. You can get instant feedback from people once you put something out there and communicate directly with fans online. It’s cool, although the perception of social media's importance is exaggerated sometimes. People focus a bit too much on what’s on their screen instead of what’s coming through their speakers.

Though the Angerfist persona emphasises an aggressive aesthetic, other artists have stated that you're an incredibly humble artist. Do you take satisfaction in mentoring new talent?

I take that as a compliment. But yeah, I like to give new talent an opportunity. It can be, for instance, through a collab with me or a remix. It can give the spotlight to someone who has skills that would otherwise not be heard by many people. 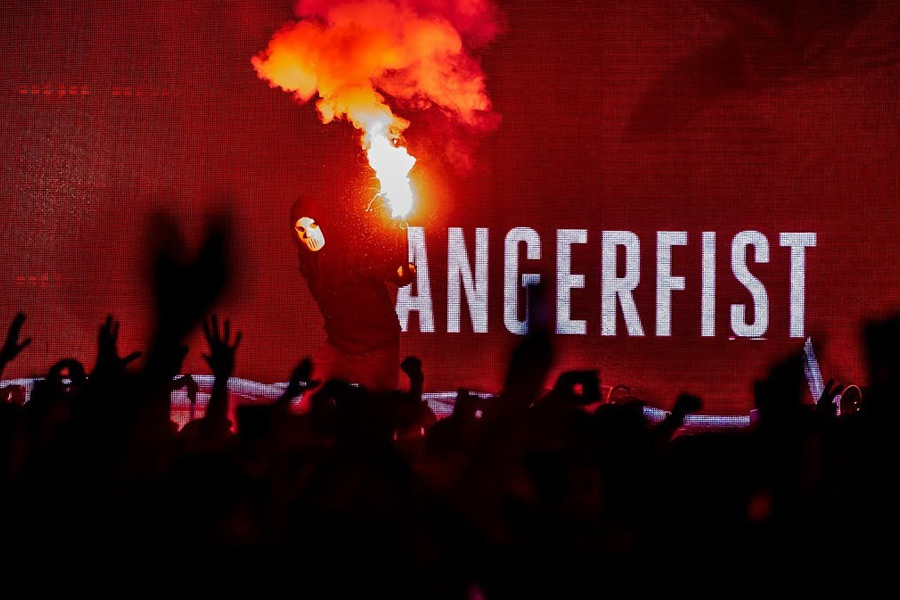 Have you considered ever starting your own label to nurture hardcore artists you felt were particularly promising?

Not really. I like the way things are right now for me as an artist at [label] Masters of Hardcore. I know myself and if I would do my own label, it would take up a lot of my time trying to turn it into something cool and would take away time from making my
own music. Respect for someone like Mad Dog who is handling Dogfight Records besides doing his own career. I’m not sure if I was made for that.

You’re hitting the festival circuit once again this year, and your headline appearance at Revolt Festival stood out as the name echoes your album title Raise & Revolt. It indicates your deep-rooted influence on the harder styles, so are there any other upcoming DJ’s/producers that you can recommend for people that are maybe unfamiliar with hardcore?

Some of the newer names in the scene that are doing well are Deadly Guns and Never Surrender. Obviously, Sefa is hardcore’s rising superstar, and one of my personal favourite producers at the moment is The Satan from Russia. He is setting the bar a bit higher right now when it comes to aggressive, angry beats, testosterone, and fuckin' filthy basslines.

There’s always been a fervent underground scene within the genre, but now we’re seeing increasing popularity in hardcore with major festivals and events emerging throughout Europe. Do you think there’s a danger of it becoming ‘mainstream’ and losing its authenticity?

It’s not a bad thing that hardcore is getting more popular worldwide. It’s just badass music, and more people are starting to see that. I enjoy playing at new festivals in new countries, bigger stages, and in front of crowds that are new to the genre. To see it spreading is what motivates me. The music itself is not changing because of that. The authenticity will be kept the way it is if artists who care about our style are involved.

To see which upcoming festivals Angerfist is playing, click here.