MNNQNS: "We start with a pop song structure and then we fuck everything up"

Though their distinctly English sounding vocals may deceive you, MNNQNS are proudly French. Hailing from the town of Rouen in Normandy, in northern France, the four-piece mesh together the energy and swag of 'Likely Lads'-era London indie with a scratchy post-punk aesthetic in a similar vein to Preoccupations, Omni, and Ought.

We caught the band straight after their opening performance at Festival Beauregard, just miles from their hometown, to talk about their experience in the UK and their forthcoming debut record Body Negative.

You were the first act of Beauregard 2019 – how did it feel to open, did you feel much pressure?

I think there's always a bit of pressure to open up a festival but you just have to do what you do every night, so it's ok. The crowds came pretty early, so that's cool. 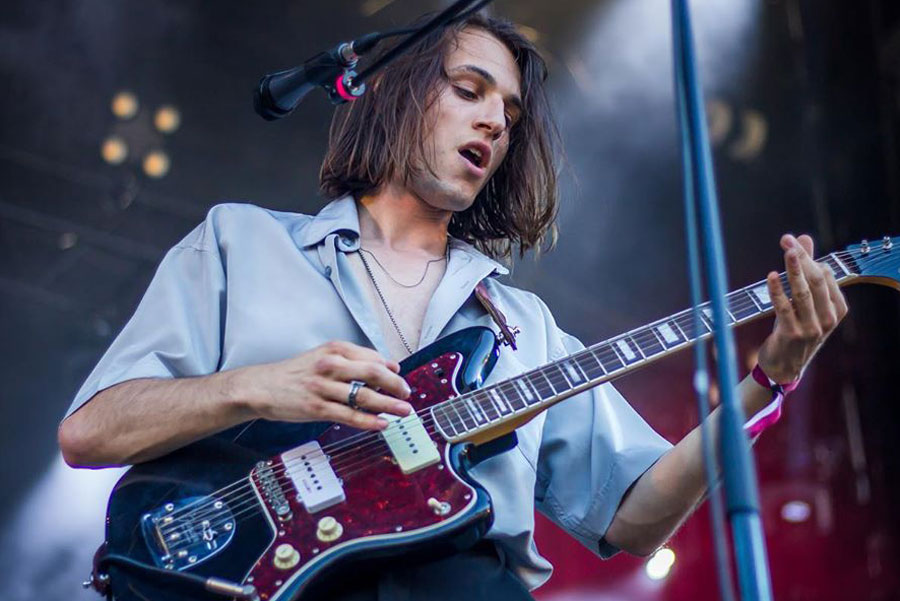 You're from near here, right? How important has Normandy been to your development as a band?

Yeah, our home town of Rouen is about an hour away from here, so we're quite close. It's very important to us because right now there is a very important music scene. It feels great to be part of this thing happening. There's Servo, who play dark, psychedelic cold-wave and who are really amazing on stage, it's like a wall of sound. There's also We Hate You Please Die, and Unschooling. Our guitar playing Marc also plays drums in Unschooling, they're a bit like us but more technical. When you play this kind of music you all end up meeting the same kind of people.

You signed to Fat Cat Records in Brighton, UK, not too long ago. How did it feel to join that label, they have a really cool roster.

It was very important for us, because the band started when I was living in Cardiff, in Wales, so it felt kind of logical to sign to a UK label. They're definitely supportive, and contributed a lot to the making of our upcoming debut, Body Negative.

Have you met any of your peers on the label yet?

Yeah! We met TRAAMS last year, Breathe Panel and Samana, the new joining. I'd like to meet Shopping, they're a really cool post-punk band.

You mentioned your time in Wales and the UK in general and how that helped inform your sound as a band… can you tell me a bit more about that?

I was just 20 years old, and I got to see this new British scene happening in small venues. I got to see Temples, just before they totally blew up, and bands like Telegram and Cheaters and many other bands. It was very defining for me because the music scene in France was very different; I can't even say there was a rock scene at the time. These days there are many more rock bands coming out of France, but five years ago it was very different. No, it's quite new.

Do you feel a responsibility to help lead this new wave?

France, like the UK, is quite a proud nation, so I'm curious whether you received any criticism or negative feedback when you started singing in English?

I don't think we ever experienced that, because many french bands sing in English. But, there is one thing in France that is annoying when you're singing in English: the radio. In France if you sing in English you won't get on the radio as easily as the French-singing artist, it's just different.

Let's talk about your sound. You've got that texturally interesting, scratchy post-punk sound, but then there's definitely a poppy, more accessible gloss to it. How do you go about finding the balance between that?

We usually start with a pop song structure, you know? Then we fuck everything up and try many different sounds. We use a lot of effects pedals and oscillators and things like that. We're always trying to write something that's easy to listen to at first and then try to bring some new layers of sound to make it more interesting than a regular pop song.

You mentioned the debut record, Body Negative. How does it feel to be so close to its release?

We really can't wait for the album to be released. It was recorded almost a year ago in the French countryside, so it's been quite a bit of time. We want it to be released but at the same time we're already looking forward to writing and releasing the second LP. We're working on it already. We're trying to push things a little further.

These last shows we've been playing almost the entire record, because the release date is getting closer, so it's time to show the people more of the album.

What else can we expect from MNNQNS in 2019?

We've got some new music videos, and a tour report from our China tour. We just got back from China, we spent ten days there and played five shows in four different cities. It's very different from town to town. The first day we played Beijing, and I think they knew the code of how to react to a rock show. And then we were playing in Taiyuan and I think it was the only entertainment in the town for the entire year so people were a bit like, "how should we react?" After the first song I asked 'do you want me to speak in French or English?' No answer. They were just shaking French flags, no clapping either. It was just different. They like it, they just don't show that they like it.

Do you have any other countries on your radar?

We'll be playing Lithuania in September I think, and Austria and maybe Canada soon too. We've got a UK tour coming in October too, we'll be playing London, Leeds, Brighton and Manchester.