The Most Ridiculous Festival Flakes

Nobody likes a flake. Nobody especially likes a flake who's scheduled to headline a festival you've paid a good portion of your month's wages, taken time out of work and travelled a good distance to attend. Though we can forgive the pregnancies (your Beyoncés, your Cardi Bs) and broken limbs (your Dave Grohls, your Childish Gambinos), here are a few infamous and particularly ridiculous flakes that still grind our gears.

Given his history for testing the limits of his followers’ seemingly endless patience and enjoying a certain elusivity when it comes to releasing new music, is it any surprise that Frank Ocean left so many people hanging again when it came to his huge headline performances in the early summer of 2017?

Though the term ‘mania’ is often overused in the popular music lexicon, the ensuing appeal of 2012’s Channel Orange and the artist behind it can only be described as such, and facilitated a marathon will-he-won’t-he? campaign for its follow-up across four teasing years that finally resulted in Blonde. To be clear, the pressure and expectation for an artist to be a public figure and keep releasing records year-on-year is often unhealthy; as Pitchfork’s Ryan Dombal astutely points out, there is a particular pressure on black artists in the limelight to represent their race and, as Dombal quotes Dave Chappelle, to “have responsibilities that go beyond your art. How dare you just be excellent?” It is perfectly acceptable for life, including, in this case, multiple contract disputes with Def Jam, to hinder the production of art, however great it is; that this elusiveness should only make his fanbase more eager is merely a happy byproduct.

The problem is that this kind of enigmatic persona set a precedent that somehow justified pulling out of several headline festival performances, albeit with passed-on apologies and half-baked excuses of ‘production delays’, as if it was another stage in building this superhero-like persona. Indeed, miraculously Ocean maintained his messiah-like status from his following, even from those who attended the likes of Primavera Sound in Barcelona, Sasquatch in George, Washington or Hangout Music Festival in Alabama, many of whom dished out for full-weekend tickets mainly to see their favourite artist. When you agree to headline for some of the world’s biggest music events there comes a responsibility to keep to the appropriate production schedule and make sure you deliver the results on time, and though the fault can’t be put solely on Ocean and the show eventually went on for Denmark’s NorthSide Festival and those that followed it, it’s sloppy professionalism.

And yet, there will still be devout Ocean fans who will read this as sacrilege... 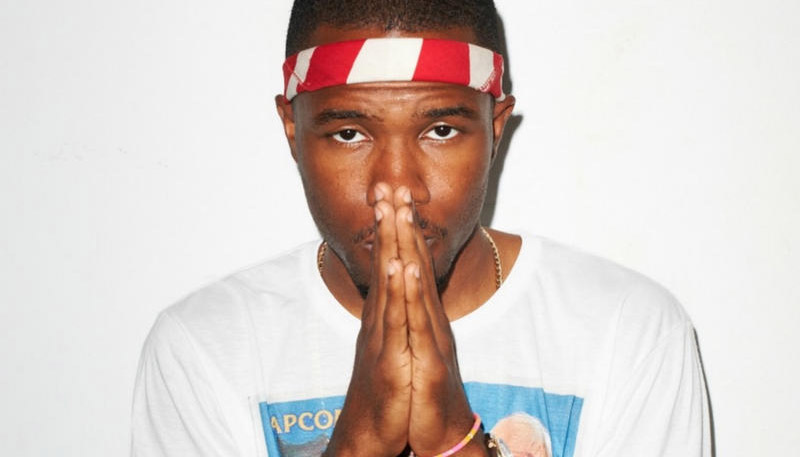 To be fair, this one is pretty rock ‘n’ roll. It was common knowledge way before the end of the noughties that the Brothers Gallagher were at breaking point after decades of bitterness and boozy feuds that went beyond the normal level of brotherly rivalry. The ‘band member ego struggle narrative’ had always existed – Lennon and McCartney, Ray and Dave Davis, Simon and Garfunkel – but Noel and Liam traded the grandad jumpers and birthday cake shenanigans for on-air heckling, coke-fueled fisticuffs, three-day benders and beer hall brawls for all the tabloids (and public) to see. It was an inherent part of Oasis’ appeal, a ticking time bomb barged from brother to brother that we all knew eventually had to blow.

That moment was minutes before Oasis’ performance at Paris’ legendary Rock en Seine in 2009. The band were meant to headline the opening night of the festival, but as they scrapped backstage whilst fellow British band Bloc Party warmed up their crowd, enough was finally enough. Towards the end of Bloc Party’s set their tour manager came on stage, and, beckoned by frontman Kele Okereke, announced in broken French that ‘Oasis ne marche pas’. The crowd seemed to laugh as if it was a prank, or at most another classic Gallagher brothers moment. But confirmation that it was worse soon followed. The Scottish artist Amy Macdonald, who was also performing at the festival, tweeted from backstage: “Oasis cancelled again with one minute to stage time! Liam smashed Noel's guitar, huuuge fight!”, and a statement from their manager Alan McGee soon solemnly followed that ‘Oasis does not exist anymore’.

Though only a month before at their glorious show at Wembley Stadium where the band’s relations had seemed more stable and Liam assured their 70,000 strong crowd that “we’re not breaking up, we’ve only just fucking started”, Oasis were finally over. “It is with some sadness and great relief that I quit Oasis tonight”, Noel declared. “People will write and say what they like but I simply could not go on working with Liam a day longer”. Though Rock en Seine may have been host to the final nail in the Oasis coffin, time has shown that perhaps it was for the best. Maybe one day they’ll return to Paris and make it up to Rock en Seine. Or anywhere for that matter. Glastonbury 2019, anyone? 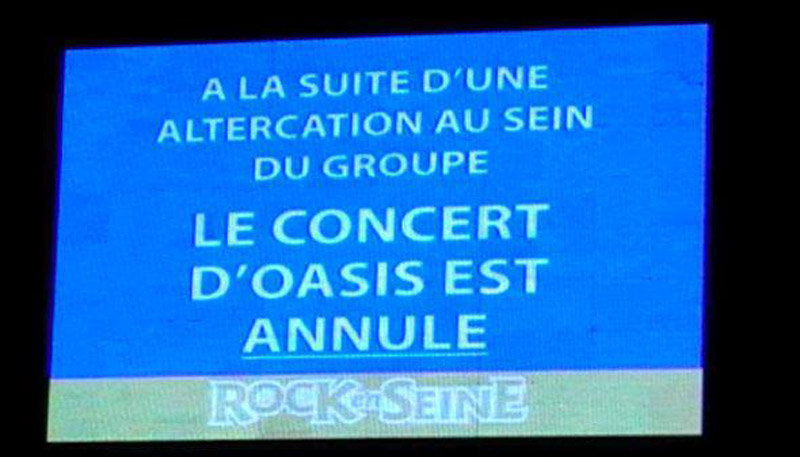 Admittedly not as iconic as the breaking up of the quintessential Britpop band perhaps, but worth a place for how classically DJ Khaled this last minute bail was. Somewhere in the past two years the producer and entrepreneur seemed to miraculously surpass the realm of living-meme famed for Snapchat videos documenting both his questionable keys to success and of course his wife’s pregnancy. His puzzling level of self-awareness became less important (though still unclear), and though his inability to stop repeating his own name like a Pokemon remained intact, DJ Khaled had become something of a household name, known for his unrelenting love for his son and respectable collaborations with the likes of Chance the Rapper, Beyonce, Jay-Z and Future. It seemed perfectly reasonable then for the music mogul to be so in demand to earn a headline slot on the closing evening of Wireless, one the UK’s leading urban music festivals.

But on the big day, the main man was nowhere to been seen around Finsbury Park, London, or even England for that matter; no, Khaled was contentedly ‘Still on vacation !!!!!!!!’ as revealed in an Instagram post showing him giving a pep-talk to his son in a swimming pool in Mexico. Though Wireless initially announced that Khaled was unable to make the festival because of ‘travel issues’, they later confused the issue by admitting they had known in advance that he would be unable to make it due to conflicting with filming for The Four, a talent show on which Khaled is a judge. But looking at father and two-year-old son discussing the release date for the new album, it’s hard not to imagine in that moment DJ Khaled telling his flight crew not to wait; he’s got his number one fan right there. 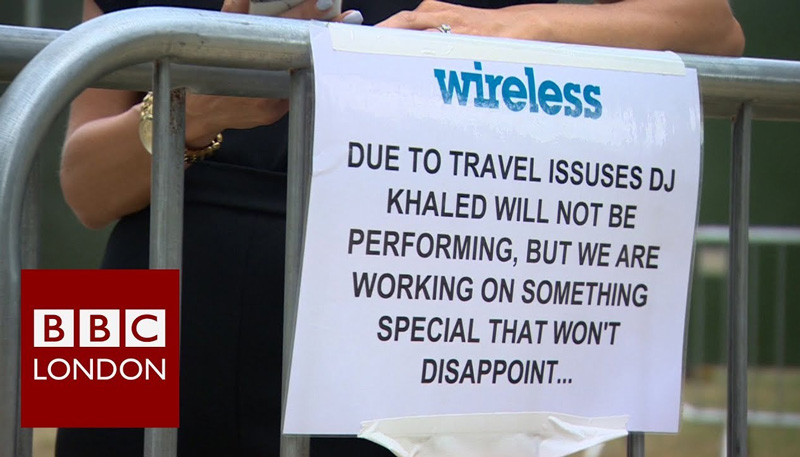 This one is just straight up rude. The Philadelphia rapper was scheduled to perform on the Saturday evening of New Orleans’ Buku Festival, but did not turn up and gave no word of warning. ‘He just cancelled on use [sic] with no advance notice’, the festival revealed in a (quite poorly written) announcement, also kindly noting they would donate a portion of his fee to the Upbeat Academy Foundation, which gives free music programmes to underprivileged kids in New Orleans. But seriously Uzi, if you’re going to miss a show at least come up with a half-assed excuse like collaborators Migos would... 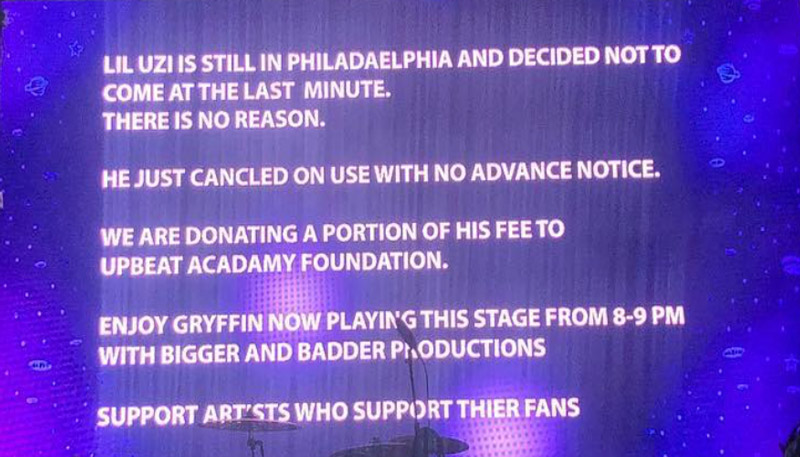 Booking Migos for a Saturday evening headline slot at Primavera Sound in 2018 symbolised the zenith of trap’s integration into the popular music sphere, as well as a certain acceptance amongst the ‘muso’ demographic that characterises the festival beyond the trio’s undermining novelty and ubiquitousness. Whether you like their music or not, it’s hard to deny its cultural significance. It was a bit of an anti-climax then when on the day of their performance the festival announced that Quavo, Offset and Takeoff had missed their flight to Barcelona. According to Pitchfork’s Stacy Anderson, word backstage was that the Atlanta group weren’t exactly apologetic, either. The ever-faithful Skepta stepped in at the last minute, though not before his own flight problems delayed his scheduled 23:45 performance to 3 AM. 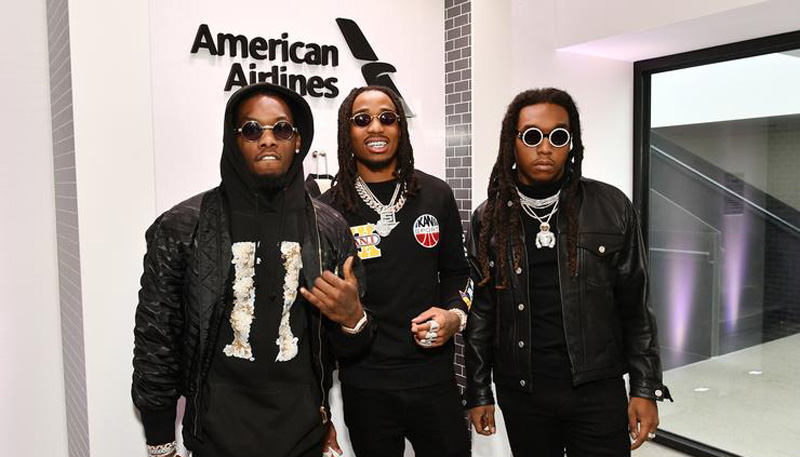