As a consumer we don't see all of the almost military level planning that is required to pull off a music festival. With so much needed to ensure the practicalities are in place and the sets actually happen, you can forgive most festivals for focussing on these aspects over attempting to nurture the music scene.

Bursting onto the scene in Belfast five years ago, AVA is not your normal festival. Offering the dual aspects of festival and conference since its inception, it's apparent that there's a desire to help grow communities and facilitate discussion built into its core.

We caught up with the founder of AVA, Sarah McBriar, after AVA London in March to discuss the conference side of her festival and how it relates to what she wants to accomplish in the scene. This is what she had to say.

How'd the idea behind the conference side of AVA come about?

Really it started with a core goal to have AVA as a platform not only for talent to perform but talent to develop as well. That idea really came from the beginning, just wanting to develop and amplify talent from the ground up, but also to promote it and platform it. That's really the core of what AVA is.

There's a lot going on at an AVA conference – keynote talks, tech showcases, talks on how musicians can make sure they're getting paid – how did you settle on the scope of the conference?

We've been booking conferences now for five years. We started the conference the same year we started the festival back in 2015 and really when booking a conference it's about the right blend between really established, credible artists who have 10+ years of experience behind them – that's usually how we book our keynotes – and then more strategic people like influencers and people who are driving change, like with Amy Lamé at the London one, but also more workshop based talks that are really focussed on developing an artist and developing an individual's career.

Also speaking to the industry, so not just talking about artists but if you're a manager or a booker or an agent, making sure there's something there for them too. 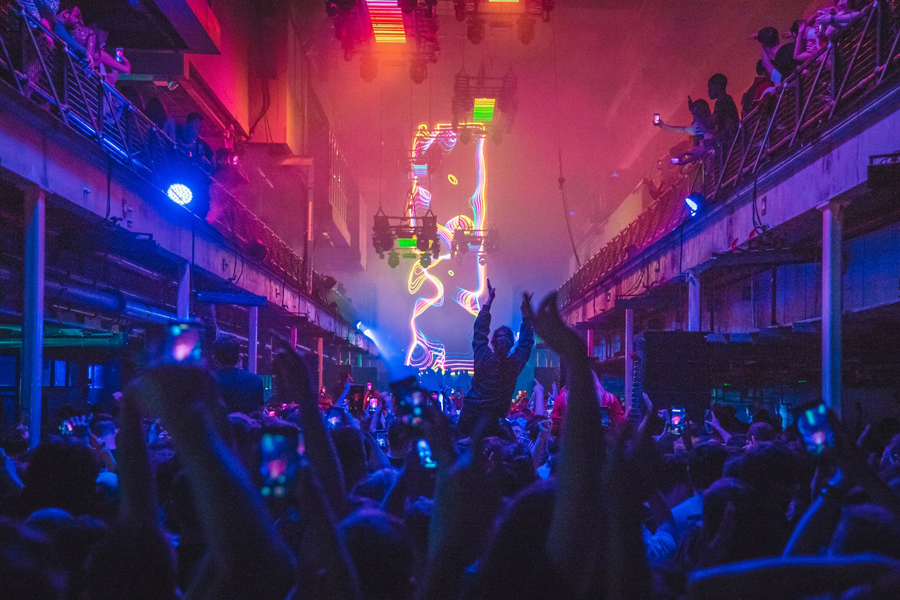 And keeping the conference free, is that an important aspect?

Yes, it's something we want to continue. It's definitely difficult to maintain a free conference and deliver at such a high standard but yes, it is important for us that there are no barriers to access.

There's a conference during AVA, correct?

Yes. It's quite similar to what you saw in London. We run at the MAC, the Metropolitan Arts Centre, and that happens Friday 31 May. So it happens on the first day of the festival, and then the festival's at a different site altogether. But yeah, it's keynotes, large panels, workshops, talks, tech drop-in, networking.

In Bicep's keynote they talked about how after Shine Festival stopped running there was a real dearth of space for electronic music in Belfast. Did you notice that too, and was that part of how AVA was founded?

I'm from Belfast originally, so obviously it's my home, it's where I'm from. I know Belfast and the artists and the scene, and have been involved in it for a long time. I've also worked on lots of other festivals and I felt there wasn't a creative platform for electronic music and art and that's something I wanted to create. I saw it working well in other cities and I thought it really needed to happen because there was so much talent that wasn't getting the right space.

What I found really interesting about the conference in London was the energy. Everyone was excited to be there and people were really engaged, which isn't the case at a lot of these things.

That's definitely true, I was really thrilled with the level of engagement, there were a lot of questions. And that's not normal. I think that shows it's working [laughs].

Do you plan on keeping the London conference going?

Yes, we do. We hope to grow it and develop what we're doing in London and fill in other art forms as well so it's not just music, developing the visual side. It's exciting because it's growing in a way that still works with emerging and local talent.

In Belfast you can really see the impact on the scene and its output. So yeah, it's an exciting time I think.

For sure. How about expanding to other cities?

Yes, we've got plans that are currently in motion, without giving too much away. We have a show coming up at Sub Club in Glasgow, so that's a hint.

AVA Festival 2019 takes place 31 May - 1 June in Belfast. Find more info on our guide, and book your festival experience here.