Over the course of its 51-year lifespan, the Isle of Wight Festival transformed from a humble affair on a modest farm, to the largest counter-cultural event of the 20th Century, to a modern-day indie-rock behemoth.

As the UK's most enduring music festival, its legacy, as much as its location, is very much interwoven in the mythos of rock 'n' roll history.

Revived by promoter John Giddings in 2002 solely because of its illustrious heritage (Giddings himself attended and witnessed the estimated 600,000 festival-goers congregate on Afton Down in 1970, surpassing the attendance of Woodstock the previous year), it's become a celebrated tradition to secure legendary headliners who themselves are integral to the tapestry of contemporary culture. It's a nostalgia-heavy affair, and for good reason.

So let's hark back to the greatest ever headliners over the many years in the festival's existence.

Ziggy Stardust, Thin White Duke, Aladdin Sane; the beloved genius behind these fictitious embodiments brought an era-spanning setlist to Seaclose Park, with a few cover versions in the mix (courtesy of Iggy Pop and Pixies) for good measure.

Battling the desponded crowd after England's Euro 2004 defeat to France didn't irk Bowie in any shape or form, kicking off proceedings with a riotous rendition of 'Rebel Rebel', plucking out favourites 'Fame', 'Ashes to Ashes' and 'Heroes' Bowie reaffirmed his legendary status.

In what was to be Bowie's last ever tour, the Isle of Wight Festival-faithful were blessed with the Starman's otherworldly presence.

Two years after his momentous Glastonbury performance, Jay-Z returned to British shores to headline Isle of Wight Festival as the only hip-hop superstar that'd successfully broken the rock and indie monopoly of festival headline slots at the time.

Paying tribute to Jimi Hendrix with a cover of 'Purple Haze', J-Hova additionally brought anthemic '99 Problems' and 'Dirt Off Your Shoulder' to the 60,000-strong crowd. The pièce de résistance, however, was flying Kanye West across the Atlantic for just one song; joining Jay-Z for 'Run This Town', the extravagant posturing was entirely vindicated by the decibel levels alone.

What's widely considered the British equivalent to Woodstock, the 1970 edition of the Isle of Wight Festival had a tremendous glut of historic talent on its roster with Joni Mitchell, The Who, Sly & The Family Stone, Leonard Cohen, and Jimi Hendrix appearing on the bill.

Headlining the Saturday night and marred with recent run-ins with the law due to indecent exposure, public drug use, and general lewd behaviour, The Doors - fronted by the enigmatic Jim Morrison - had a few issues to contend with let alone being outshone by their preceding artists.

Swiftly quashing any pre-show reservations with a performance enveloped in mystique and drama, it became one of the band's most fabled performances in their short-lived but comprehensively impactful four-year existence, predominantly as Jim Morrison's last ever UK appearance before his passing in 1971.

No one will ever fill Freddie's shoes. Queen realised this when appointing former Free frontman Paul Rodgers as their temporary singer during an ill-fated stint from '04-09. What they subsequently realised after that period, however, is that Queen's vast catalogue of bombastic sing-a-longs, embedded so deep within popular culture, need to be performed with a bit of extravagance.

Teetering on a tribute act of sorts when announcing their tour with former Pop Idol contestant Adam Lambert, it gave Brian May and Roger Taylor the flamboyant injection they needed. In what was their debut headline performance on the Isle of Wight, it was the closest thing you'd get to see Freddie strutting on-stage once more; 'Don't Stop Me Now', 'Who Wants To Live Forever', 'Radio Ga Ga' were all executed with the blend of exuberance and emotional gravitas that only Freddie could bring.

When he appeared onscreen during the second verse of 'Bohemian Rhapsody', there wasn't a dry eye or arm aloft in the crowd.

Dylan shocked the music industry, having shunned Woodstock in favour of the budding festival's second outing. Fans and critics presumed he'd never return to the spotlight, which made this appearance truly memorable.

Accompanied by The Band, Dylan blew any cobwebs away with performances of 'Like A Rolling Stone', 'Maggie's Farm', and 'Highway 61 Revisited'. He's never returned to the island since. 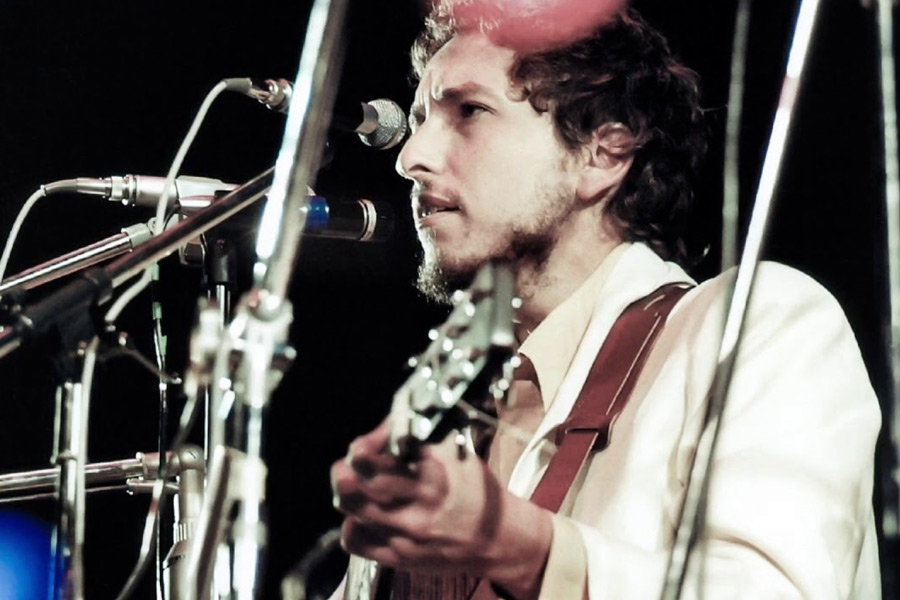 Forever the showmen and never to be outdone, for Mick 'n' Keef's Isle of Wight headline performance John Giddings spent an additional £100k to install their protruding catwalk-come-conveyor belt through the heart of the crowd. It paid dividends, albeit solely for three songs in their set; when the drums kicked in to 'Miss You', the centre-stage shifted forwards so the entire band could play in amongst the adoring masses.

Backed by their arsenal of rock 'n' roll tracks (including a once-in-a-lifetime duet of 'Ain't Too Proud To Beg' with Amy Winehouse) it was one of the most exhilarating performances in the festival's lavish history. Would you expect anything less?

Springsteen truly warrants his nickname, evidenced during his mammoth three-hour Sunday closing set. Performing with boundless energy and enthusiasm, 'The Boss' plowed his way through a hefty portion of his life's work. Clearly infectious, as the crowd craved more even after he hit the three-hour point, closing his only Isle of Wight Festival performance with a firework-laden cover of 'Twist and Shout'.

The biggest cheer was largely reserved for his heart-wrenching rendition of 'Born In The U.S.A', having not performed his landmark track in the UK since 1996.

Before Coldplay set their sights on transatlantic domination and the top of the Billboard Charts, their understated brand of emotional indie balladry was enough to engage with their crowd, love it or hate it. Having headlined Glastonbury twice already, it was time to see if they belonged in the upper echelons of legendary festival headliners.

Chris Martin and co brought an X&Y-saturated set to Seaclose Park, leaving enough room for contemporary classics 'Yellow', 'The Scientist', 'Clocks', and even a cover of Lou Reed's 'Perfect Day' - Reed performed earlier that day but refused to play his signature song. Once the set had finished, there wasn't a cynic in sight.

Whichever your preference of Fleetwood Mac lineup, their dysfunctional Rumours-era variant is firmly the most popular and Isle of Wight Festival-goers were fortunate to be one of the final UK crowds to see them play - harmoniously at least - together. Earmarked to headline Glastonbury that year Stevie Nicks, Mick Fleetwood, and Lindsay Buckingham plumped for Seaclose Park over Worthy Farm. Quite the coup for Giddings and 70,000 ticket holders, being a festival exclusive.

Borderline-euphoric renditions of 'Little Lies', 'Dreams', and 'The Chain' justified Mac's place on their pop-rock pedestal and in the pantheon of Isle of Wight Festival legends.

Without a shadow of a doubt the festival's most iconic performance. Not only because it succeeded his storied Woodstock appearance two weeks earlier, but it would be Jimi Hendrix's final performance before his death 18 days later.

The legacy of his headline performance richly permeates in the festival's lifeblood, with artists paying tribute to the pioneering guitarist each year, to a statue erected on the 1970 festival site in commemoration of his prodigious talent.

Though his setlist included the likes of 'Hey Joe', and 'Voodoo Child (Slight Return)', it was the optimistic track 'Message To Love' that retrospectively became the festival's unofficial anthem. 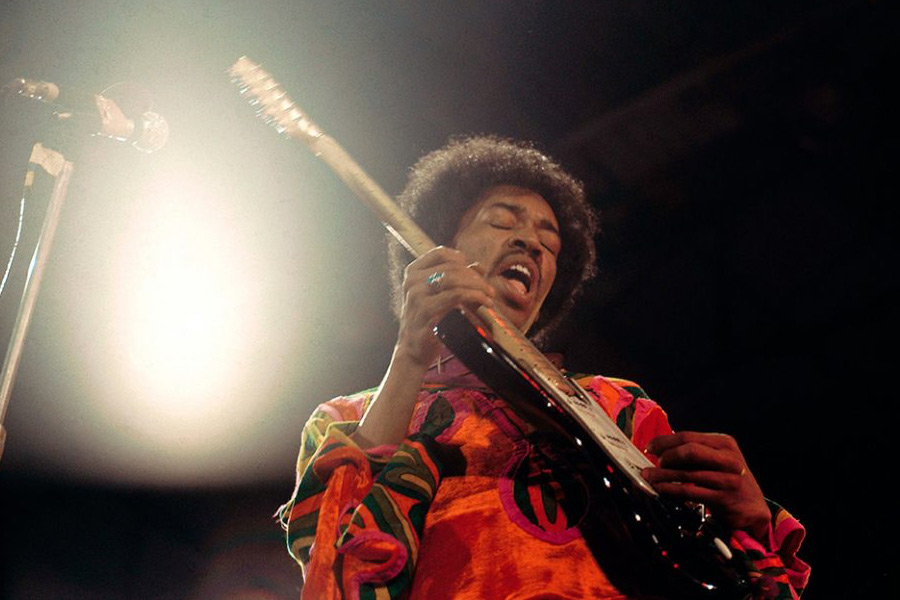