Naked City and the Spirit of South East London

In October of 2018, The New York Times wrote a piece entitled 'A Sweaty Night Out in London's New Jazz Scene', documenting their experience at the weekly improvised show Steam Down in Deptford, as well as speaking to other key players in the vibrant scene; saxophonist Nubya Garcia, and Ezra Collective's sibling rhythm section Femi and TJ Koleoso among them. While there are arguments to be had about whether or not UK music needs American validation, it definitely felt part of the culmination of the successes that had characterised a landmark year for the scene in question.

A lot has been written about what defines the newest breed of jazz music, many pointing to the clear African, Caribbean and Latin influences, as well as the elements of UK club sounds like breakbeat, garage, jungle, and grime, all the while seemingly quick to assuage concerns about it fitting any sort of stuffy jazz stereotype (perish the thought).

Another thing that comes up time and again, and with good reason, is South East London. Although not confined to the likes of Peckham, Deptford, Bermondsey, Brockley, New Cross or Catford, there's no denying that this corner of the capital can lay claim to being the beating heart of the scene.

References to the area can be found throughout the music, with track names like ‘Brockley’ and ‘Rye Lane Shuffle’ coming courtesy of Theon Cross and Moses Boyd respectively, and lyrics about waiting for the N171 bus featuring on a standout track from the latter’s recent album (which also includes another tune entitled 'Marooned in SE6'). Many of the key figures were born, raised, educated in – and shaped by – these postcodes.

The most recent instalment of the Jazz FM Awards demonstrated South East London's vibrancy, with Steam Down winning awards for innovation and the best live experience of the year, Sons Of Kemet taking home the prize for album of the year, and Poppy Ajudha and Nubya Garcia being named the year's best soul act and UK jazz act respectively.

It's not just a case of a shared location that makes this worthy of note though, the success of the artists is testament to the support that they each offer one another. Look at any of their individual outputs and you'll see cross-collaboration, head to a live event and you'll no doubt see familiar faces appearing on stage regardless of whether their presence was advertised. In their corner of the city, these figures have created an environment that engenders cooperation, and facilitates a growth and dissemination that feels entirely organic and self-determined.

That's not to say there aren't external figures offering additional support and platforms for these artists. Gilles Peterson is a perfect example of someone that has consistently championed the new generation of talent – through his radio output on 6music and Worldwide FM, his record label Brownswood Recordings, and now his very own festival We Out Here – introducing them to a wider audience in the process.

Equally, confining focus solely on those born and brought up in this particular corner of the capital overlooks the other key players – artists like Ezra Collective and Blue Lab Beats from North London, institutions like Total Refreshment Centre in the East, or West London's jazz re:freshed to name a few. And that's without even mentioning the enormous input of those from outside the capital. But there's no escaping the fact the scene has found its de facto home amongst a collection of neighbouring SE postcodes. And it's this that leads us to an event that wears a South East London identity proudly.

From its home in Beckenham Place Park to the acts on the lineup, Naked City Festival celebrates the soul of the capital, with a particular focus on the sounds and the styles that have shaped the current crop of artists. It doesn't feel like an accident that the colour-scheme of the festival's branding brings to mind the artwork for Sons of Kemet's Mercury Prize nominated record Your Queen is a Reptile. 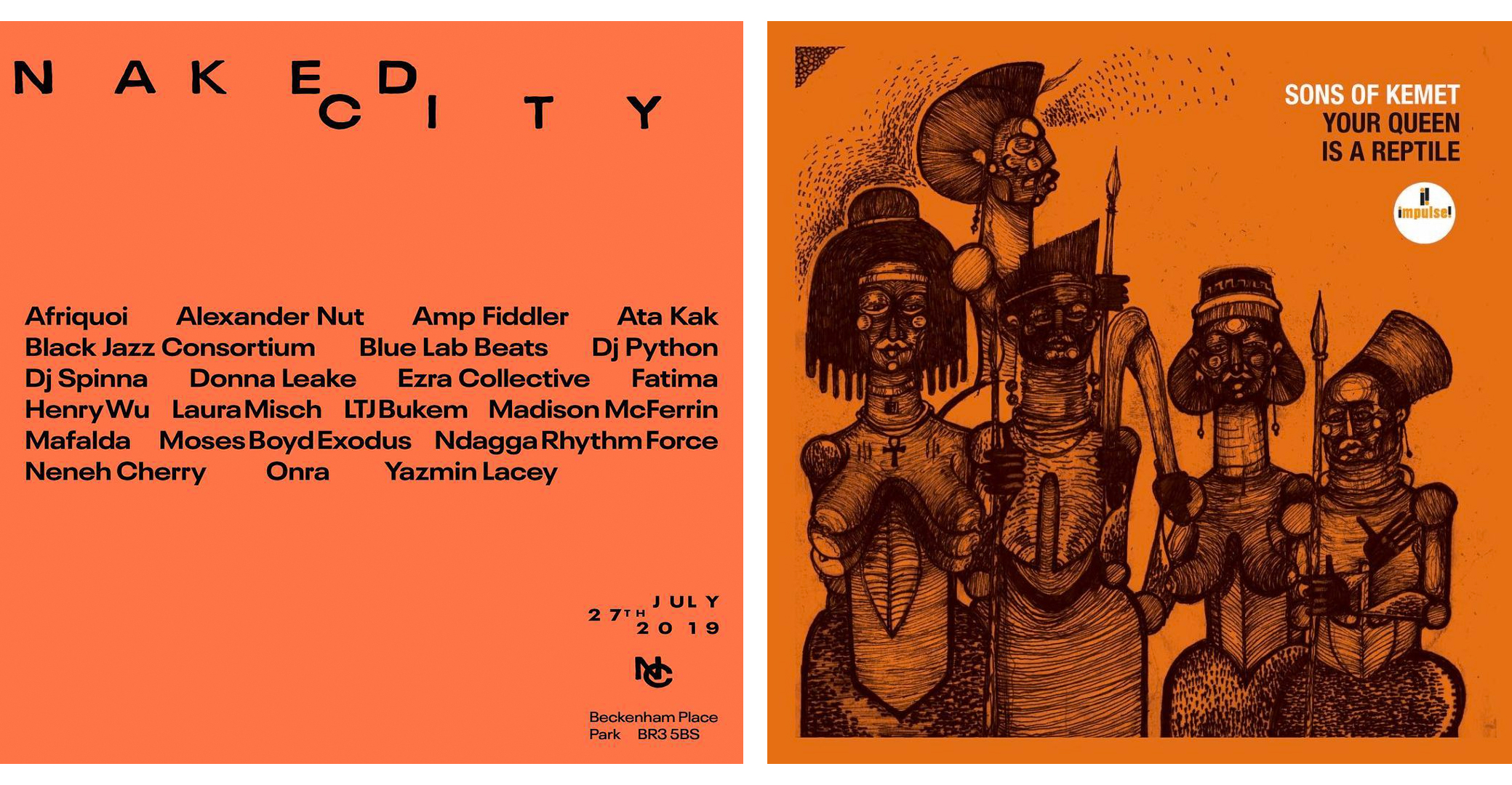 The lineup showcases not just the new brand of jazz but also the myriad influences that have shaped its identity. Influential figures like LTJ Bukem, Amp Fiddler, Ata Kak and Neneh Cherry from the worlds of drum and bass, funk, soul and Afrobeat sit alongside acts indelibly associated with the new scene like Kamaal Williams, Moses Boyd, and Ezra Collective, as well as other artists with no small part to play in its continued success: Laura Misch, Yazmin Lacey, Fatima.

With an ever-growing fanbase, new festivals like Naked City tapping into the buzz, and increased attention from those in the music industry and mainstream press, the scene finds itself at a pivotal moment.

In a cripplingly accurate pastiche of a new brand of jazz fans, Vice recently identified the so-called 'Nu Jazz Lad', capturing in a fairly throwaway comedy piece a genuine concern about whether this could all be a fad – something for the Peckham-dwelling, white, middle-class, graphic design student to claim as his own in an attempt to keep up with the latest trends. From personal experience, whilst at Steam Down towards the back end of last year I heard a guy who fit that description perfectly telling his date how "house came and went, then grime, then Afro-swing, I think jazz is the new thing". And make no mistake, I'm also painfully aware that I tick many of the boxes for the description laid out in the Vice article.

What remains to be seen is whether this scene can avoid the traps that others have fallen into at this point. Take grime, for example, which now finds itself in an unusual state of flux having burst back into the mainstream attention around the middle of this decade, catapulting its biggest stars to the charts, the mainstream press, critical acclaim, and even Glastonbury headline status; all the while losing something of its underground appeal and relevance as attentions turned to the likes of Afro-Bashment and UK drill. Similarly, dubstep suffered at the hands of widespread commercialisation and trans-Atlantic interest as the sounds shifted towards the bright lights and big paycheques of the archetypal American super-festivals.

When buzz develops around any scene, there's a risk of it being diluted or coopted in some way. And yet, it feels far less likely that this will happen in this instance. Not only does the love for the music from those creating it seem too pure for that to happen, their motivations also appear to be much more artistic and emotional than fuelled by financial gain. It's the reason Steam Down pride themselves on keeping their weekly shows free, regularly espousing anti-capitalist ideas at their events, and painting hopeful pictures of alternative futures that in no way suggest a desire to simply cash-in on any successes.