Cosmic Gate on Emotion in Music, Evolution, and New Music

Electronic music has grown from dark, often literally underground clubs to perhaps the most dominant musical force across the globe today. In that time there have been, like all styles of music, progressions, evolutions, and trends, but perhaps no electronic genre has had a more precipitous rise and underlying influence on the popular takeover of EDM than trance. Its ability to convey soaring heights of emotion was critical to the foundation of sounds that fully brought electronic music into the mainstream and into stadiums the world over.

One of trance's most enduring acts is German duo Cosmic Gate. Coming up in the late 90s during the genre's commercial heyday, Claus Terhoeven aka Nic Chagall and Stefan Bossems aka Bossi have been topping bills and selling out shows for over two decades. Their unique ability to instil music with heartfelt emotion and euphoric builds and releases while never loosing that danceable beat has influenced an entire generation of DJs.

Even with the whole world at a standstill the duo have remained busy, putting out a new single and the fourth instalment of their Wake Your Mind Session series, so we thought it might be fun to catch up with them and see how they're holding up.

This is what they had to say.

Your latest single 'Universal Love' seems a very appropriate anthem for these trying times we find ourselves in. Take me through how the song came together and the thinking behind it.

First of all, some background info. The original vocal from 'Universal Love' was written about 25 years ago from the Belgian group Natural Born Grooves and singer Bibi, and it was a popular track in the clubs we used to DJ in back in the day in Germany.

About the new version; we started working on beats, baseline, etc, without having the 'Universal Love' vocal in mind at all, so as I said, we started working on the music, literally everything as you know it now, and at some point during the production, we felt the instrumental might need a vocal to fully live up to its potential. So then the search started, and after a while of trying out certain things and ideas, we somehow stumbled over this old tune, which we literally hadn't listened to for over a decade: 'Universal Love'!

Long story short, we sampled and tried the vocal out, and fortunately it fit into the harmonies like it was literally made for the music. Sometimes you have to be lucky, and we were.  Our record company then contacted with the original writers, and fortunately the guys liked what we did, and kindly gave us permission for the use of the vocal. So we'd like to say thank you very much to NBG for the clearing and permission of using the vocal, we hope everyone shares NBG's and our vision when listening to this in the new context of our music.

A lot of emotion in music gets conveyed through vocals, which you guys utilise a lot very effectively, but you're also masters at giving your instrumentals, either underneath vocals or on their own, a lot of emotion too. How do you convey emotion in electronic instrumentation?

Thats a very good question, emotions are something very subjective, two people can listen to one song, and one is totally touched while the other maybe doesn't feel at all what the writer felt when composing the music. And that's what we do, we try to write emotional music, music that touches us personally, something that hopefully goes a little deeper when listening. We try to create melodies and harmonies that speak to people's hearts, hopefully. Melodies that maybe make you want to fly, or dream, or make you want tell someone I love you. We want to write music that makes people feel, start to feel, as we once said and named one of our albums. This is most important to us.

When you started in 1999 stage production was obviously not nearly as big a deal as it is now. How has the dramatic increase of visuals over the years influenced your music?

This is true, back in the late 90s a DJ was playing, and for sure no individual visuals were played, this was unthinkable, as funny as it sounds now. Good visuals now are simply a great support for the music. On a big new album tour as we had with Forward Ever Backward Never or the Materia tour before, the visuals were an important extra to the music. Don't we all love it when music and visuals seem to blend into one? And that's why we like to have this support. Visuals are important, but most important still is the music. Music will always be first, so for us, the visuals do not influence the music we write, but they certainly can lift a show to another level. 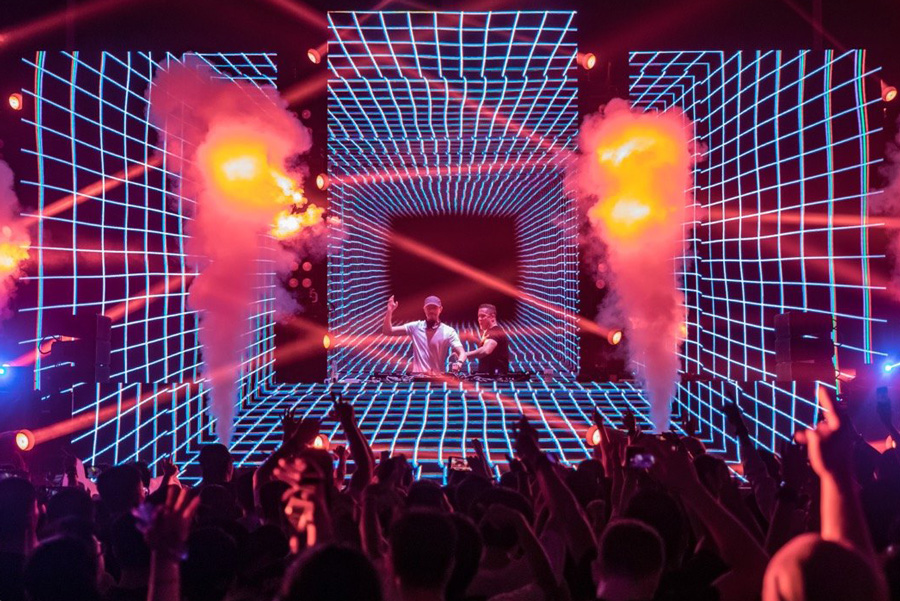 I've read you talking about how 'Exploration of Space' needed some time to really take off. These days it seems like most artists and labels are worried that if a track doesn't take off immediately it'll get lost in the ever flowing release of new content thanks to streaming. Is this something you think about? Especially when deciding what to release as a single and when to release it?

Yes, we said this, and it is true. The first times we played EOS it went over well, but we sure did not expect it to be our biggest hit maybe ever. What we shouldn't forget here, this was about 20 years ago, is the scene was different, and music sometimes took months and months to build. A tune could be a hit somewhere and it took many months or longer until it developed in another part of the globe, simply because the physical vinyl or CD release in that area had not happened yet.

On top of that, no global radio show like nowadays would reach literally every trance fan on the same day, which is another big difference to how things were. Still, we feel some tracks in 2020 do need longer than others, and the ones that do certainly are not a bad choice. So when picking a single, we certainly do not go for what's obvious, we simply choose a single by what we think has the most long term potential, and if it takes a bit longer for some parts of the audience to like or understand it, that won't stop us from releasing it.

Trance songs are often quite lengthy to allow for the song to progress and build, but radio often favours short, punchy tracks. How do you balance wanting to be true to your vision with a desire for the music to be heard?

This is actually a very good question, as it's a big problem, not only with trance music. Whoever has seen the movie Bohemian Rhapsody, there is this scene when Queen argue about what their next single should be, and this famous label A&R can't wrap his head around a song over three minutes even being an option to be released as a single. And as you say, it's a big issue still nowadays. For us to get our music to make sense in three minutes is literally impossible, four minutes can even sometimes be a mission.

What we do is we go as far as we can, but if a song makes sense at 4.20 and not 3.40, to give an example, then we go for the longer version, knowing we take away the chance of certain stations playing the song just for these stupid reasons. But we think emotions can't be cut too short, sometimes a good story simply needs time to be told.

What is the division of labour between you two? How do you divide what aspects of the music each of you are responsible for?

Back in the day we literally did everything together. DJ, production, interviews, living on the same street, we would even start our travels together by picking each other up and heading towards the airport together. These days we do not live next door anymore, on top of that, somehow the amount of work around what we do became more intense and time consuming. Producing takes way more time than back in the day, social media and media presence in general is more important, the radio shows come on top and so for all these reasons, we step by step divided certain aspects a little more. Work on music at first happens more individually on the road, not in the home studio as much anymore, the radio show or some written interviews get done individually, just some small examples how it's different now, than it used to be when we started.

Having performed all over the world several times over, do audience reactions vary from country to country or does music hit everyone similarly?

Yes, we feel music hits everyone similarly somehow. To say Australians outparty Europeans, or Americans go harder than Asians wouldn't be fair. There are amazing crowds all around the globe, and we are in the lucky position that our fans follow us to our shows, they come for our specific kind of sound, which turns most shows, no matter where we are, literally into kind of home games if we might say so. This is very special and unique and we very much appreciate our fans for being so loyal to what we do for so many years.

Obviously most of the world is currently stuck at home. How are you spending your unexpected free time? Following the trend of trying to learn a new skill?

It's kind of funny, but still without shows happening and flying around the globe as we were used to, there are still so many things to do. Write and produce new music, each our own productions too, remixes, we did the WYMS004 Mix Album, the weekly radio show, interviews like here, we do live DJ mixes from our homes, etc, etc. We are everything but bored while surely being at home more than we've ever been in the last 20 plus years, so this is also a time of resting up, reflecting and recharging our batteries for a bit, if this will result in some new skills, let's see!

There’s a lot of looking back these days while we're all at home. Can you choose one of your favourite festival experiences and tell us about it?

Fortunately, there have been so many of these experiences, one of the most recent ones was A State Of Trace 900 in Mexico City last year in September. Long story short, the crowd was simply electric, still now thinking about it, the feeling up there on stage was unreal. No DJ could ever wish to play for such an amazing crowd. We are thankful for such an experience to lift us that high after so many years on the road.